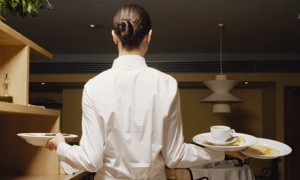 Everybody has to start somewhere, the world's most famous actors included.

En route to that elusive big break, today's most recognizable thespians paid their dues with blood, sweat and tears. They could have been your friendly janitor, carpenter, popcorn vendor, mascot, or Uber driver.

They could have even waited on your table.

It's a grand tradition in Hollywood to start from the bottom as a waiter, hoping to catch the eye of casting directors and other bigwigs in the acting industry. In fact, whenever a new restaurant opens in Hollywood, aspiring actors flock like crazy in hopes of being discovered. Getting a job as a waiter in Hollywood can seem like landing a part in a movie.

At the very least waiting on tables helps you pay the bills in between acting classes and auditions.

To get you inspired, we've rounded up a list of actors and actresses who started out as waiters and waitresses.

An all-around entertainer who is as comfortable acting as singing, Amy Adams is one of the most beautiful talents active in the industry today. She put those good looks to use by waitressing at Hooters and eventually used her earnings to buy a used car. Today, she can throw her money on the world's flashiest set of wheels.

Sandra was a triple threat â€” as a restaurant waitress, bartender, and hostess, that is. She particularly flaunted her mean skills in mixology as a cocktail waitress.

Coincidentally, the character actress worked with Sandra at the very same restaurant. While Sandra was busy hosting, Jennifer would balance glasses as a cocktail waitress. She confessed to being a truant in the job though.

Gwen appears in a movie or TV show here and there, so she's also worthy of including in this list. The blonde rocker once worked at a Dairy Queen in her native Orange County.

Before she was showcasing her pipes in William McKinley High School, Naya had been an alumna of Hooters.

With her genes, Megan was a shoo-in for the stereotypical position of hot waitress. She eventually quit the industry after she has had enough of customers copping a feel of her.

Before starring in such movies as "Glitter," the shrill-voiced diva would be checking coats and waitressing in Manhattan.

Sure, she's an Oscar-winning actress to one and all, but did you know that she once served dishes in New York City? She fondly remembers herself as a "good waitress" who will gladly do any job.

This Oscar winner was not just any waitress; she was a singing waitress, at a Catskill Mountain resort. This is probably why screenwriters are not afraid to entrust her with singing parts in movies and TV shows every now and then.

Guesting on Queen Latifah's talk show, Jennifer was spontaneously put on the phone with a former boss at a burger joint where she was waitressing. She recounted how lenient her boss was to her, letting her work at theatrical productions for months a time, and then welcoming her back with open arms. Reminiscing about that time in an interview with Marie Claire, Jen admitted that she wasn't very good at waiting on tables and even dropped burgers on customer's pants.

Marisa used to work as a waitress at Tony Roma's Steakhouse.

Chris broke into Hollywood after chatting up director Rae Dawn Chong when he was bussing tables at the Bubba Gump Shrimp Company in Hawaii.

After traveling to India to find herself, Kristen Wiig got a job as a waitress at one of Universal Studios' executive dining halls.