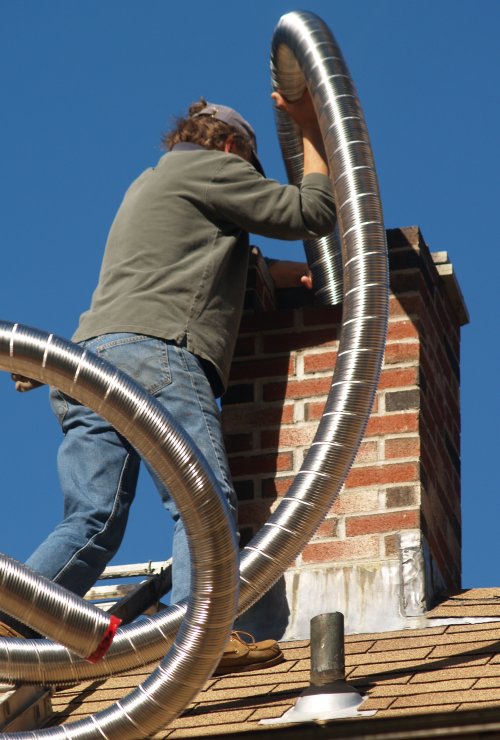 Creosote build-up is one of the prime reasons behind chimney fires. As soon as a fireplace is used, creosote gets deposited in the chimney lining or the flue. Creosote is highly flammable and creates hazard while using a fireplace; it is better to bring down the amount of build-up as much as possible for safety concerns.

We can define creosote as a corrosive and flammable substance that builds up on the walls of the fireplace and the chimney. This is formed as soon as the unburned wood particles and fly ash combine while making an exit through the chimney. The gas and the unburned particles may condense and build up on the walls of the chimney. With time, the soot or the creosote build-ups become dangerous and have the potential to cause a chimney fire.

Creosote and Chimney Fires: Things you Need to Know

The job of chimneys is getting rid of the by-products of combustion - water vapour, smoke, unburned wood particles, tar, hydrocarbon. As these substances flow up the comparatively cooler chimney, condensation takes place. The residue sticking to the inner walls of the chimney is creosote.

Black or brown in appearance, creosote can be flaky and crusty, sticky and drippy or shiny and hard. In fact, it may line a single chimney in various forms. Whatever form it takes, it is highly combustible. In case there is sufficient build up and the internal flue temperature is high, it may cause a chimney fire.

In the first stage, creosote is like flaky soot. This is very easy to get rid of using a basic chimney brush.

In the second stage, creosote acquires the form of shiny hard black flakes. These flakes contain hardened tar that is difficult to brush away. However, you can get rid of it without using extreme measures. The rotary loop is one of the most common ways of removing creosote in the second stage.

It is advisable to clean the creosote build-up before it reaches the third stage. This resembles a coat of tar dripping down the liner. Creosote in the third stage is extremely tough to get rid of. Glazed creosote can be very thick as it hardens on being continually re-coated.

Hot fires can ignite this type of creosote. This may turn extremely hazardous. If creosote in this stage catches fire, removal of it is easy; this is because it leaves behind a spongy residue. However, remember that the chimney fires can fast lead to a house fire. This is because the intense flames cause fire on the roof or damage the flue. This causes the combustible parts of the house to get ignited. The chemical removers are quite effective in removing stage 3 creosote.

Consider replacing the chimney liner in this stage.

To prevent hazard, it is better to take a few steps, like these, to prevent build-ups.

Prevention of the creosote build-up is a necessity if you have a chimney. Avoiding creosote build-up will not just bring down the dangers of combustion but will also prevent smoke and carbon monoxide emission.

Clean chimneys rarely catch fire. Make sure to get a professional to inspect the solid fuel venting annually. This will keep it in good shape, alleviating chances of chimney fire substantially.