When Tiger Woods was younger —winning major after major— he would dedicate 13 hours per day to training.

Let’s preface this by saying most of us don’t have that kind of time on our hands. We have to work 8 to 12 hours per day and take care of our kids in the hours between, just to name two of the multitude of responsibilities most of us have. 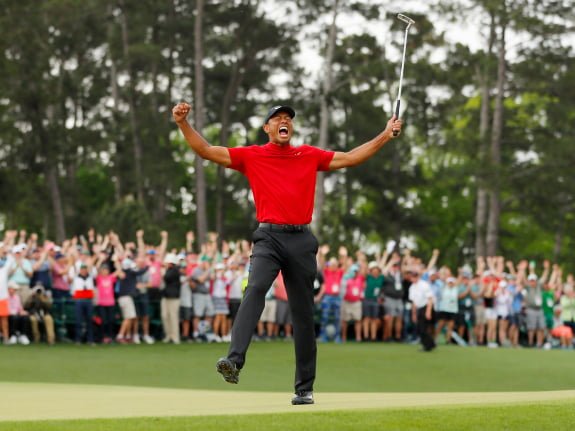 However, if you want to be in tip-top shape, it takes hard work. Maybe you can’t swing a 13-hour training regime like Tiger Woods—99% of us can’t. But you’ll need to be disciplined and create some sort of solid schedule that you can stick to. For me, it Brazilian Jiu-Jitsu that keeps me motivated. I bust my butt all day at work, pick up the kids in the afternoon, spend some time with them while also getting things ready for their next school day, then by 6:30 PM, I’m on my way to roll on the mats. I do this four days a week almost without fail. Of course, there are extenuating circumstances every once in a while, but I prioritize that hour-and-a-half Monday through Thursday.

When Tiger was a favorite at Intertops to win pretty much any given event, there probably wasn’t anyone on the PGA tour who outworked him.

According to Tiger’s former trainer, Hank Haney, Woods would wake up at the crack of dawn and hit his first workout at 6 AM. This normally consisted of a 4-mile run at six in the morning, followed by weight training in the gym. After that, he would work on his swing for hours, perfecting his technique and reinforcing muscle memory. After practicing his fundamentals, he would hit the links and golf 18 holes. Then, he’d hit the pavement again for another 4-mile run. After running, Woods would look for someone to play basketball or tennis with.

According to Golfweek.USAToday.com, the workout went as such:[1]

One exciting and interesting takeaway is that Haney attributes Woods’ success more to a mental edge than the physical fitness itself.

“He knew he was paying a price that not many people would pay, and that gives you an edge mentally. He walked to the first tee every week knowing he wasn’t going to run across many players who had outworked him.” – Haney

Golf is so difficult because you have so much time to think. Instead of instinctually reacting like in other sports, you are by yourself, standing over a ball trying to calculate the idiosyncrasies of the course and the elements. So, Woods had an advantage because his workouts made him more confident. He knew he was more prepared than his competitors, and thus, didn’t psych himself out before taking his shots.

Now at 44 years of age, Woods can’t keep up that kind of routine.

However, he won the Masters Tournament in 2019, making it his 5th and the first since 2005, in what many consider the greatest comeback story in golf. The coronavirus-laden 2020 season has been rough. But Woods still won a major during all the madness and ranks in the top 40 on the earnings board for the season.

In his 40s, Woods still starts his training with early morning cardio for one hour. After that he hits the gym for lower-body weight training. After some breakfast he’s at the range by 9 AM to hit balls for a couple of hours. After the range he spends 30 minutes to an hour putting, he hits the links for 9 holes—this usually runs from around noon to 1:30 PM. After a late lunch, he’s back at the range for a few hours to hit more balls and work on his short-game. Then at around 6 or 6:30 PM, he finishes up with another 30 minutes in the gym to work his upper-body.

It isn’t as intense as his youthful training sessions, but it’s still pretty intense. The focal-point of how Tiger Woods trains that we need to pull from is his consistency. We all have different goals and are at different levels. But if you want to be the best you, start with a consistant schedule that you can commit to, even if it’s just 30 minutes every Tuesday and Friday, make sure you put in those 30 minutes on those two days!