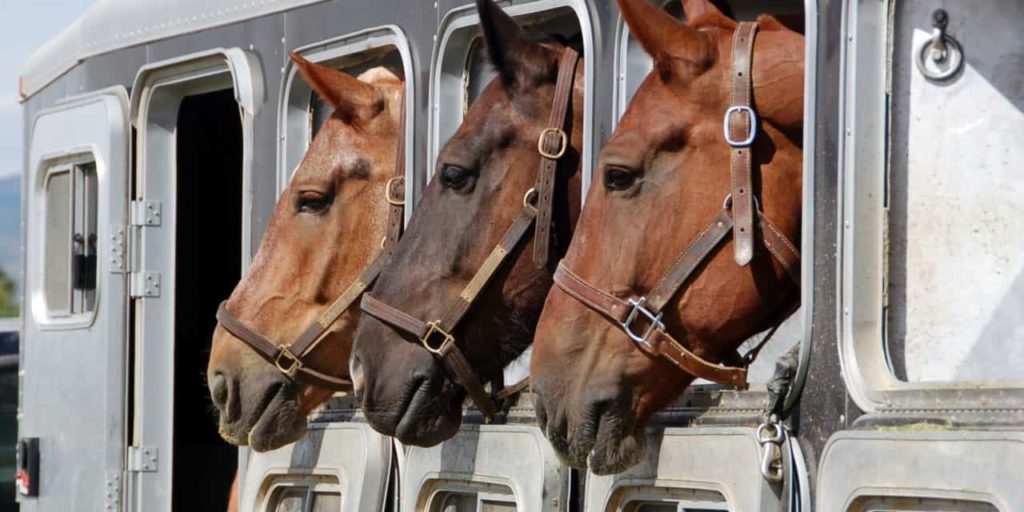 If you have custody of a horse, there are various scenarios in which you could need to transport it. Those include running a farm, needing to take the horse to a vet or farrier, or seeking to display the horse at a competition or show. However, what if you have never transported a horse before?

In this case, you need to approach the task carefully, especially if the horse itself is not accustomed to regular travelling. You might have been advised to transport it in either a horse trailer or horsebox, but particular rules and recommendations will apply whichever of these two options you choose.

What is the difference between a trailer and horsebox?

The term “trailer” is probably rather self-explanatory here; it refers to an unpowered vehicle which another, powered vehicle would tow as your horse is in the trailer. However, a trailer built for transporting one or more horses can also be called a horsebox, which could cause confusion.

This is because not all horseboxes are actually trailers. Some horseboxes are instead motorized vehicles, meaning that you would drive one while the horse is in it. This has implications for insurance, as there is no “catch-all” insurance product covering both trailers and motorized horseboxes.

Let’s assume that you want to insure a motorized horsebox. In this case, you would need what is called horsebox insurance. This would cover the vehicle itself and damage inflicted on third parties, but – crucially – not the horse itself. For that, you would need separate horse insurance.

Fortunately, if you are in the UK, its Vehicle & Operator Services Agency has published a detailed guide that could help you to unravel legal tangles of using either a horsebox or trailer over there.

The British Horse Society advises that a horse trailer should be professionally serviced at least once annually. When the checks do take place, don’t simply assume that they will cover the inside or underside of the trailer’s floor; double-check that this will indeed be assessed.

In any case, though, the checks will not be thorough – putting the onus on you to consult the manufacturer’s handbook for further pointers. One especially useful anagram for you to remember is FLOWERS, as you should check Fuel, Lights, Oil, Water, Electrics, Rubber and Self. The last of those concerns whether you are actually fit to drive.

When inspecting the tires, check the tread depth and whether any stones or other objects have become embedded in it and so need removing. Bulges, lumps or cuts on these tires would be warning signs, as would rust or damage on the trailer’s hinges and springs.

How to watch out for your horse’s welfare

You should set aside a lot of time for loading your horse – as, if the horse seems reluctant to load as the clock is ticking down, you could too easily lose your temper, which would be a big no-no. Having at least two people helping with loading or unloading could further help keep frustration at bay.

Before loading or unloading begins, don protective clothing including boots, gloves and a hat. Your horse, meanwhile, can benefit from wearing suitable protective travel boots or bandages during loading, though Horse & Hound warns you against over-clothing your horse. This is because horses don’t feel the chill as easily as we do, so “too cool” is better than “too warm”.

On the journey itself, you should take extra hay and water for that horse as well as warm clothes and refreshments for yourself. As an overly long, warm and bumpy trip will be discomforting to your horse, see if you can break up a lengthy itinerary into several shorter trips.

Also, make sure that the trailer or horsebox is adequately ventilated and, en route, you clean out the vehicle regularly. Nonetheless, as you can never be certain if or when your horse will become unwell during the journey, you should look up where veterinary practices are located on the route.

A horse can risk, for example, suffering from pneumonia or shipping fever if, during particularly long trips, you fail to regularly pull over and untie the horse to let it lower its head.

Meanwhile, through offering water and hay at frequent rest breaks, you can keep dehydration – and, therefore, the risk of respiratory issues or colic – at bay. Offer your own hay, too; now isn’t the time for an abrupt and unexpected change in the horse’s diet.