The main aim of the dating apps and dating sites is to help people connect with each other and build a new relationship. There are many reasons that affect the people from meeting a partner in the real life, so the dating apps eliminate the stress in finding a mutual match because of the technical aspects used in designing the application. The dating apps use algorithms that will consider the interests and hobbies of a person and matches with the other users having the same interest, and similarly the app has a filter feature that will help the users to easily identify their match based on their preferences.

Tinder is a location based dating app that facilitates in connecting the potential partners based on mutual interests and allows them to chat. The social search mobile app is mainly used for the dating service that branches its service by making it a general social media platform. This dating app is the first app that allows the users to swipe the profiles and find the best match that suits their personality and interests.

The online dating app was launched in 2012 and was incubated in the Hatch lab and then in 2014 the dating app had announced that they register 1 billion swipes in a day. According to the swipe feature, the users can swipe the potential matches to the right and they can swipe the profile to the left and it signifies that they have passed the match. The dating app uses the Facebook details of the user to create a new profile on the dating platform with the existing photos and the app uses the social graph and basic information to analyze the candidates.

The users will receive a list of compatible profiles based on the compatible factors like the mutual friends, geographical location and the common likes and interests; using these prospective details the dating app helps the users to swipe a profile either to the right or to the left. When the user likes a match and if even that profile accepts the request, they can have private conversation within the dating app. The Tinder dating app is accessed by more than one hundred ninety six countries. 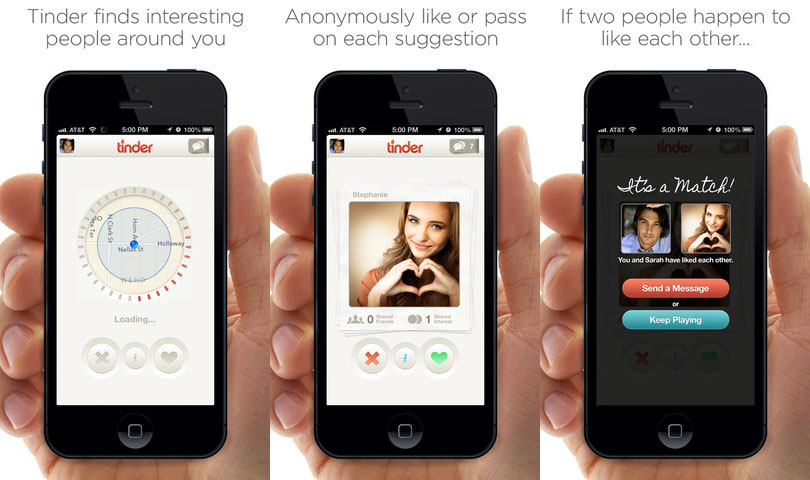 Swipe feature: This is the key feature of the app, where the profiles that are compatible with the user’s profile are analyzed with the help of the app software. The users can make use of the swipe feature to select the like profiles and pass the other profiles from the given list.

Mutual connection: As the app uses the Facebook profile information, the dating app will check whether the user and the matching profile, share common friends or if they have 2 different friends who know each other.

The online dating app is used by people around the world in one hundred and ninety six countries and the app is also available in thirty different languages. According to the report released in the year 2014, approximately fifty million people use the online dating app on a regular basis and with an average the app matches twelve million matches each day; however the users have to make around one billion swipes a day to get those twelve million potential profiles. The online dating app released the report for the year 2015, where the app users have collectively swiped 1.6 B profiles and received twenty six million matches in a day. The minimum age for a user to open a Tinder account is 18 years. But many young boys and girls of age 18 tried to open an account in the online dating platform, but they were met with cards stating that they can access only if they are above 18 years. The Tinder team is also trying to develop an application that is exclusively designed for the young boys and girls.

Many on demand services have started incorporating the virtual reality concept in their business to enhance their brand name and product in the market. Similarly, the online dating application- Tinder unveiled their new concept.

The virtual reality is a technology that uses the software application to generate realistic sounds, images and other things that replicate the real time and stimulate the presence of the person in the three dimensional environment. The users will use an equipment to look around the artificial world that seems to project the virtual environment into the real life. The virtual reality situations are screened on the projector screen, computer monitor and the virtual reality headset. In recent times, a head mounted display is used and it takes the form of the goggles that has a front screen, where the actions can be seen through the screen and the audio effects can be sensed through the headsets or speakers.

The Consumer Electronics Show is a trade show that is organized by the Consumer Technology Association that is in the month of January in Las Vegas Conventional center in Las Vegas in Nevada in the United States of America. In the trade show hosts the presentation of the new technologies and products launched in the consumer electronic industry. The Consumer Electronic Show for this year as held from 5th to 8th January, 2017 in Las Vegas, Nevada. Many market giants like LG, Samsung products were also launched in the trade event.

It is a prank

In the post, the Tinder team said that they have launched the VR headset after many companies launching the virtual reality equipment. The technical company wanted to create its own equipment that helps the people to connect with each other to have a real life experience.

Though it seems to be fake news, the concept of virtual reality in the dating app is not a bad idea. As there are many companies and products using the virtual reality concept their business, it is even possible for the online dating apps to launch such technological advancements in the future.