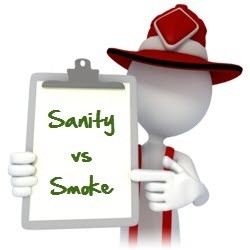 When we talk about software testing, plenty of terms and testing methodologies will strike in your mind. You can use a wide range of testing techniques to ensure the quality of the software application you're developing, and Smoke Testing and Sanity Testing are two among the most misunderstood methods or topics in software testing. You can find plenty of resources and material available online for the same, but none of them help users to get their confusion clear!

"What is the basic difference between Smoke testing and Sanity testing?" - This has become a very common question among the newbie testers planning to get their fundamentals cleared. If you're one of those testers getting confused between these two terms, keep reading this article to explore about Smoke testing and Sanity testing as well as the basic differences between both of these testing techniques.

What is Smoke Testing?

Smoke testing term basically comes from hardware testing. Whenever you get any new hardware and power it on, if smoke comes out, you don't proceed with its testing. The same scenario is applicable in the software testing. Smoke testing is performed after any application builds to ascertain that the crucial functionalities of the application is working fine. This kind of testing is executed before any detailed functional or regression tests take place on the developed application. This means that the testing team doesn't have to waste their time installing and testing the application.

For example, a typical smoke testing scenario would be to verify that the application launched successfully and checking whether the GUI is responsive or not.

What is Sanity Testing?

Once you've received a developed software application with a few minor changes in a code or functionality, Sanity testing is performed to ascertain that the errors or bugs have been removed and no more issues are introduced due to the recent changes made within an application. The main goal to perform this kind of testing is to ensure that the proposed functionality works roughly expected by the you.

However, one should understand that the objective of Sanity testing is no to test thoroughly the entire new functionality, but to scrutinize whether the developer has applied some Sanity while developing the application or not.

Okay, but what are the other differences between these two types of testing? There is no denying that the aim of both of these testing methodologies is the same, to ensure that the application is ready for detailed testing, but both of them differ from each other in a lot of aspects discussed below:

Hope this article would help you know the exact difference between smoke and sanity testing. Do you've more differences to share? Share your thoughts in the comments.