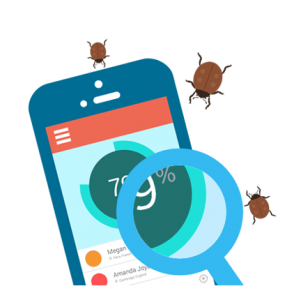 Mobile application testing is an important part of the product development lifecycle; unfortunately, it is often overlooked due to time constraints.  Turning out applications that have not been rigorously tested would only backfire when users start complaining and eventually stop using the app all together. There have been cases where applications have been released into the market before extensive testing in order to meet quick deadlines.  However, if you carry out testing activities, right from the beginning, even before the codes have been written, you would be able to keep pace with the developers and contribute to delivering applications within short development timelines.

Let’s take a look at how you can efficiently tackle mobile apps testing:

Manually testing a mobile application is most suited for evaluation and analysis. It is a user centric approach that focusses on verifying whether the app meets all the user requirements. The best scenario to deploy manual testing is for evaluating the user experience and user interface of an application. Ideally, this should account for just around 20% of your testing, the rest should be automated.

Automated testing should be set up for as many scenarios as possible. Automation is the most important testing activity. You can set a schedule to configure entire libraries or series of tests as and when required. They work seamlessly with your continuous integration system. In case you don’t have such a system a competent set of automated tests will prevent relapses and keep your application robust. The various test cases that should be automated are:

Here are a few strategies to test your mobile application

Automation for performance testing can be started out with all the information gathered during functional testing. These test cases can be modified for scalability and concurrency.

Performance unit tests can be designed way before the actual coding. Essentially, performance test driven development (TDD) is an approach that mobile application testing experts follow, wherein performance expectations and tests for a module is created before writing the code. Identify specific code areas that could end up as bottlenecks and device tests that assess their scalability.

When you create performance unit tests, you wind up having several different units that can be clubbed to make a modular library of test series that can be easily adapted and scaled to suit different test scenarios. These simple units can be arranged to create complex interactions that thoroughly test complicated test instances.

The system would consider a synthetic user as a regular user and respond as it would to a user. Whereas, in reality, they are a set of instructions that are programmed to execute a specific transaction path within a live environment just as a user would do. These instructions are marked up and fully instrumental enabling us to analyze the metrics reported.

Performing load tests on the cloud makes mobile application testing realistic as the unit you are testing would have to go through the very same network layers, firewalls and load balancers that then actual user would have to go through. Cloud also enables you to spread the load sources over different geographies to achieve realistic testing scenarios. You would be able to scale up or down, as well as, test specific functionality easily this way.

Mobile application testing is a combined effort, it requires the attention of everyone involved with the application to contribute positively to turning out a bug-free application. It helps to share test results with those involved to help better understand the various scenarios and work accordingly.

stephaniereinhardt is author at LeraBlog. The author's views are entirely their own and may not reflect the views and opinions of LeraBlog staff.