Green energy is key to helping the environment, and over the past decade different forms of generating power have been developed to further progress our efforts to be more ecologically friendly. Photovoltaic (PV) solar panels have become a very popular method that allows homeowners to reap the benefits of renewable energy, and these can be seen mounted on homes all over the world.

We all know that going green can be an effective way of helping the environment, but what will it do for you?

The benefits of solar panels have been recognised globally - in the United Kingdom a government initiative awarded free solar panels to homeowners to encourage eco-friendly behaviour. These panels were leased for 25 years in exchange for the "feed-in tariff" payment that customers would have received for the energy that they generated.

The United States have also echoed the importance of solar power by instilling several initiatives to encourage Americans to root for renewable energy. Ex-President George W Bush set up the Solar America Initiative in 2006, which was aimed at accelerating the commercialisation of solar power technology. This scheme closed in 2009, but many integral parts of the programme have been taken into the new US Department of Energy SunShot Initiative, which is working towards reducing the cost of installing solar power systems to encourage citizens to jump on board the global clean energy race.

How will solar power affect you? 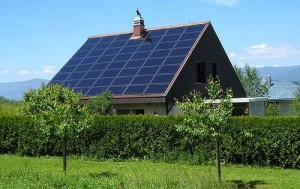 Not only will solar panels help the planet, but they could benefit your bank balance too. If someone in the UK pays for their own solar energy system, they are eligible to receive a feed-in tariff where they will receive a set amount per kilowatt hour of power that they generate. On top of this, they will also see a significant reduction in their annual energy bills as they have to rely less from a supplier, and any excess energy that isn't used can also be sold back to the grid.

Customers in America will also see similar reductions in the cost of their household energy bills, and also protect them against rising energy prices from outside suppliers.

Those who choose to install solar panels on their homes or businesses will also be helping to reduce the global reliance on fossil fuels and prevent further damage to the environment.

How will solar panels affect your home?

Whilst solar panels are a fantastic way to generate renewable energy and even generate a little extra revenue, it does mean making a change to your home. Solar panels are usually fixed to the roof of a property, which not only affects the aesthetics of your home but also your ability to change certain things. For example, if you want to replace your roof whilst there are solar panels attached, you will have to have them removed and reinstalled, which could be both time consuming and costly.

Questions have also been raised over how having solar panels on your home will affect its resale price. According to a recent survey in the UK, a third of buyers would be willing to pay more for a property if it had solar panels fitted. As solar panels can provide a considerable reduction in energy costs you are therefore offering free electricity to buyers, which can be hugely enticing especially when energy prices often fluctuate. The Appraisal Institute in America also found that the value of a property increased by $20,000 for every $1,000 annual reduction in household running costs gained from solar panels. 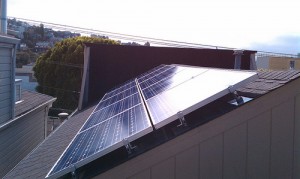 However with every silver lining, there must be a cloud. Some British banks are refusing to supply mortgages for homes that were fitted with free panels as they were awarded on the condition of a roof lease agreement that can last up to 25 years. David Dalby, a director of the Royal Institute of Chartered Surveyors, stated that he does support the use of renewable energy, but that an inflexible panel lease could result in a failed transaction when selling.

Some banks are willing to negotiate on this - for example, Lloyds Banking Group will only offer a mortgage on homes with solar panel roof leases agreed with their approved list of solar panel suppliers. However, as the feed-in tariff rate has been recently reduced by the government, it is less lucrative for suppliers to offer the panel system for free in exchange for the fee received tariff. Therefore suppliers such as Eon and British Gas have stopped offering free panels, and it is predicted that more will follow, so the issue facing mortgages on homes with free panel leases may begin to fade out in the future.

Governments in different regions across the globe will have different policies on homes with solar panels, so consult your local authority for further information on how you can expect your environmentally friendly investment to affect your home if planning to resell.

Rosie Percy is a writer interested in areas such as business, health environment issues. For more information on solar power and renewable energy click here. Rosie lives and works by the seaside in Brighton, UK.
More information about solar power use and advantages can be read at www.1001-home-efficiency-tips.com/solar_energy1.html.

Rosie Percy is author at LeraBlog. The author's views are entirely their own and may not reflect the views and opinions of LeraBlog staff.