While the smartphone market has experienced considerable growth during the last five years, there are signs that this may be beginning to lose momentum. According to market research firm Nielsen Holdings NV, smartphone penetration in the highly influential Asia-Pacific region is now approaching saturation levels and showing considerable signs of abating. 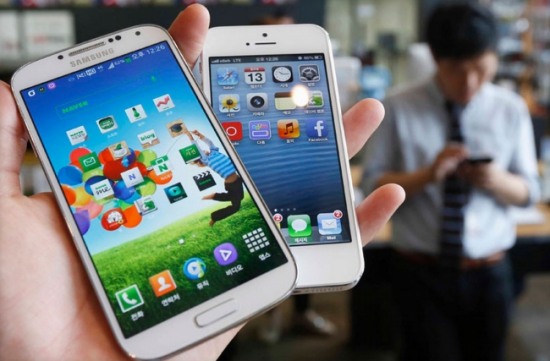 This is despite the level of innovation that exists within the market, which continues to deliver new models and handsets on a monthly basis. Take last year, for example, which saw two technological giants go head to head in the quest for market supremacy and brought us the highly coveted iPhone 5 and the Samsung Galaxy S4.

The iPhone 5 or Samsung Galaxy 4S? Determining a Market Winner

In terms of sales, the iPhone 5 leads the way on its closest rival. Despite a strong showing by Samsung in the second quarter of this year, the last 3 months of 2012 saw the iPhone outsell the Galaxy 4S by an estimated 10 million units. These statistics do not necessarily reveal the truth about each individual handset, however, while they fail to indicate which model is the most beneficial for users. If you are considering purchasing one of these handsets, there are other factors that you will need to give careful consideration to. For example: –

The Display and User-Friendliness

While size isn't everything when it comes to a smartphone display, it is certainly a key factor. Along with touch screen capacity and ease of navigation, it is one of the most important things you should appraise when selecting a new handset. In these respects, the Galaxy 4S actually has an edge on the iPhone, as it's 5 inch Super AMOLED display and superior image resolution outshines the relatively compact and limited 4 inch LCD iPhone screen. So if you regularly use your smartphone to watch videos or stream high resolution media, the Galaxy 4S may represent a more suitable choice.

In terms of audio capacity, Samsung clearly adopted a â€˜less is more approach' when designing the Galaxy 4S. To this end, it's compact back-mounted speaker appears relatively small in size but manages to deliver outstanding sound quality. Once again, this is in stark contrast to the iPhone 5, which boasts powerful dual speakers that fail to deliver the level of audio performance that you would expect as a consumer. While this may be primarily because these speakers are located at the bottom of the phone and therefore deliver a sound that is easier to muffle, it doesn't stop the Galaxy S4 once again outshining its more coveted rival.

Perhaps the most important consideration, the specification and overall performance of these handsets will ultimately determine their value and level of usability. In terms of the iPhone 5, the impressive 1.3 GHz A6 processor allows for 1 GB of RAM and enables users to seamlessly sift between multiple browser pages. Not to be outdone, however, the Galaxy 4S also features a powerful quad-core 1.9 GHz 600 processor and up to 2 GB of RAM, which means that it offers users more substantial internal memory. While on the surface this may give the 4S a considerable advantage, the smooth performance of the iPhone 5 and the ease with which users can navigate multiple applications simultaneously means that Apple's innovation holds a slight edge.

Although it is hard to determine a clear winner, there is little doubt that each handset offers something different to each demographic. While the Galaxy 4S may be more suited to recreational uses, for example, the iPhone 5 holds greater appeal among professional consumers. It is important to keep your usage in mind when choosing between the two, as this is the most simple and efficient way of separating two mightily impressive handsets.

This post was written by Jordan, who is a technology blogger and researcher based in the UK. If you are looking to perform a comparison between the iPhone5 and the Galaxy 4S, he recommends that you visit mobilephones.org.uk today.

J P Lansdale is author at LeraBlog. The author's views are entirely their own and may not reflect the views and opinions of LeraBlog staff.