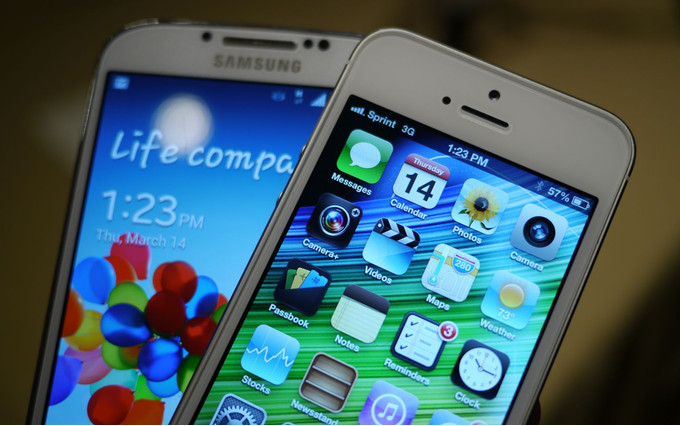 Samsung recently unveiled its new Galaxy S4 flagship to much adulation, and fans of the manufacturer boasted that the device would be the best selling smartphone of the year. It's true that the Galaxy S4 has received the best reception of any new mobile release so far this year, but tech giant Apple is yet to unveil its new wares for 2013.

These two manufacturers are constantly battling both in and out of court, to obtain patents for new technology and grab the most sales possible. Samsung has been closing the gap on Apple year on year with its smartphone market share, so will the next iPhone will sell more than the Galaxy S4, or has Samsung done enough this time to finally trample Apple?

Recent research by digital analysts ComScore found that Apple is the biggest US smartphone vendor with a 38.9% share, compared to Samsung that has a 21.3% share. The study also showed Apple is the fastest growing manufacturer too, with its growth up 3.9% in contrast to Samsung's growth of 1% in the same period. This signals that iPhones are in greater demand than handsets by any rival manufacturer. This is especially interesting when you take into consideration the wide selection of devices offered by Samsung in contrast to the one from Apple.

However, it's worth noting that in November 2012, sales figures from analysts Strategy Analytics showed the Galaxy S III outsold the iPhone, with Samsung shifting 18 million flagships in the space of three months compared to 16.2 million iPhone 4S units. This dip from Apple may have been due to consumers holding off from buying the iPhone 4S in anticipation of the iPhone 5. However, the Galaxy S4's pre-sale figures are already through the roof, with Phones 4u's own research showing a 40% higher demand for the S4 compared to the demand for the S3 ahead of its launch last year.

Samsung has had a bit of a head-start with its Galaxy S4, announcing the device earlier in the year than Apple did its new iPhone. This could be a tactical move to try and get people to buy into the handset and sign up for 24 months before they get a glimpse of the iPhone 5S or iPhone 6 (whatever it may be called). Samsung also has a much higher marketing budget behind its products, and according to mobile analysts Asymco, Samsung spent $5.3bn in 2012 advertising its products in comparison to Apple's $1bn spend.

When it comes to functionality the Samsung Galaxy S4 deals with multitasking really well due to its quad-core processor. However, in our opinion the S4 is slightly lacklustre because the majority of the innovations touted as selling points don't really have that many real life applications. For example, Sound & Shot allows users to record an audio clip to add to a photo, but in reality, a still photo or a video will generally suffice. Respected tech site CNET echoed this sentiment, commenting "If you’re looking for Samsung’s new Galaxy S4 to define a novel new era of smartphone greatness, it’s time to temper your expectations."

Apple's next iPhone is rumoured to feature a Super HD screen display and 13 megapixel camera, albeit in a case that is not dissimilar to the iPhone 5 chassis. Michael Gartenberg, vice president of market research firm Jupiter Media told The Times: "We won't see revolutionary products [from Apple], but we very well could see evolutionary products." Apple's last few iPhones have been all about honing a popular device rather than reinventing it completely, so it's likely the next iPhone will follow suit.

With rumours rife that Apple may have brought the launch of its new iPhone forward rather than sticking to its usual September/October unveiling schedule, it could be that we see the new device as early as June. But, until we can test both handsets for ourselves, we'll have to keep speculating whether this will be Samsung's year, or if Apple will triumph when it comes to the battle of the flagship smartphones.

This post was published on behalf of Abbi Cox of Phones 4u-where you can pre-order the Samsung Galaxy S4 now.