Since their invention in 2003, e-cigs have revolutionized the 100-year old tobacco industry. Over the past few years, we’ve seen a lot of cool technological and social improvements in the e-cig industry, some of which were even displayed at the CES 2014 event.

One of the newly developed social enhancements incorporated in electronic cigarettes enable vapers to initiate valuable social contacts between themselves through a uniquely designed Smart Pack that alerts users when other e-cig consumers are nearby.

Smokers who want to abandon their tobacco smoking habit that is associated with so many health threats, including heart disease, chronic obstructive pulmonary disease, lung cancer and other forms of lung damage, are increasingly adopting e-cigs as a healthier way to smoke.

Manufacturers compete between themselves to make e-cigs more affordable, safer, more stylish and convenient for smokers. Several studies have confirmed the positive influence that e-cigarettes have on a former traditional cigarette smoker, which consists in the elimination of hundreds of toxic, cancer-causing chemicals contained in tobacco smoke. E-cig users basically inhale nicotine-enriched water vapor delivered in a manner that resembles regular cigarette smoking, which appeals to an increasing number of former tobacco users.

One of the popular e-cig brands, Blu Cigs, has made one step further to popularize electronic cigarettes as a safer way to smoke, which involves the production of a unique e-cig package kit called the “Smart Pack”.

This uniquely designed e-cigarette pack has several technical improvements in terms of battery life and control over nicotine concentration and strength delivered through inhalation, but perhaps the main feature is a social enhancement. It consists in the incorporation of a device that detects other vapers in close proximity, or a Blu Cigs retail store, and alerts the owner through the vibration of the pack. 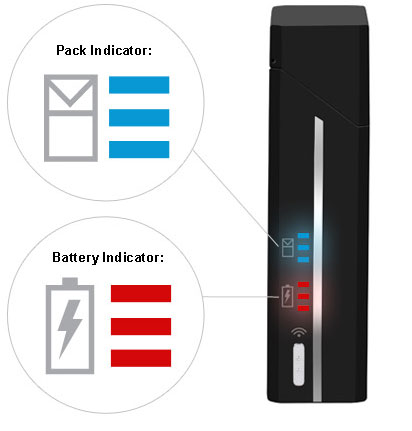 Smoking cigarettes is a social activity at its core. Lighting up a cigarette and discussing various topics and news with friends and co-workers is such a familiar routine for regular cigarette users that they are rarely able to abandon the unhealthy habit because they may miss the social communication rewards they used to obtain, besides the nicotine "kick".

An e-cig user may find it difficult to engage in social communication with tobacco smokers because of the stigma and the prejudices associated with e-cigs in traditional tobacco smoking social circles. Essentially, regular cigarette users are rarely able to "accept" an e-cig consumer as one of their own for various reasons. They may feel that their habit is threatened by this new "e-cig invasion" or they may feel uncomfortable around someone who had the mental strength to abandon a habit that they are not yet ready to eliminate from their lives. Another reason may be that smokers think of e-cigs as a fad.

Whatever the reason, vapers would benefit immensely from a device that would allow social contact between them through a special identification device. With the Blu Smart Pack, this aspiration has now become a reality. The "pack" identifies electronic cigarette consumers, and the owner may want to initiate social communication with other e-cigarette users or benefit from the vicinity of a Blu retail store for electronic cigarette supplies.

What would make the social experience for electronic cigarette users even better? Perhaps it would be the incorporation of Facebook and Twitter feeds into the device in the near future. It would allow users to identify each other using social networks, form common interest groups, discuss the features of electronic cigarettes and obtain solid feedback from other e-cig enthusiasts.

It’s important for e-cig consumers to become a strong social group that can popularize healthier smoking alternatives among traditional cigarette users, which would potentially lower the frequency of smoking-related diseases and deaths.

Although medical researchers don't believe that nicotine delivery devices, such as electronic cigarettes or nicotine patches, are completely safe because they still deliver an addictive stimulant into the bloodstream, most of them agree on the fact that electronic cigarettes are associated with significantly reduced health risks when compared to regular tobacco products.

The social enhancements in electronic cigarettes may contribute to increasing the awareness among cigarette smokers about the existence of healthier smoking alternatives, such as e-cigarettes.

The Blu Social Pack isn’t perfect by any means but it’s the first step towards making e-cigs a social and cool hobby.

Interested about the technology advancements in the e-cig world? Watch this coverage of CES 2014 by The Verge: