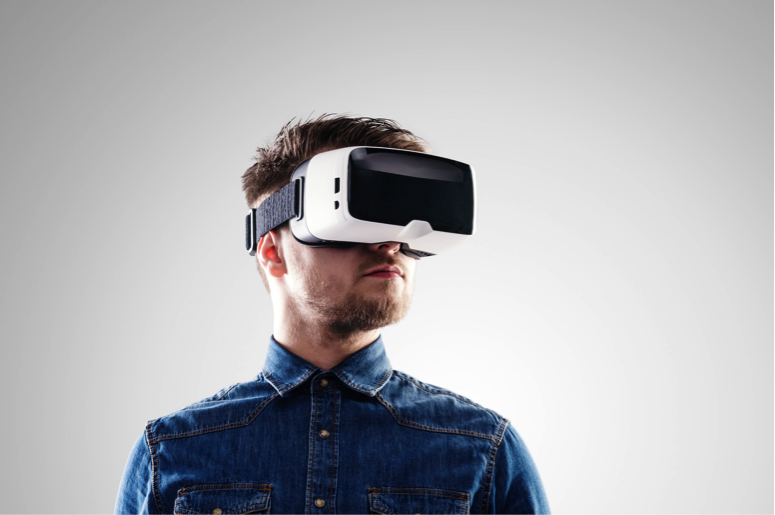 Technology is developing at the speed of light. In recent years the gaming industry has pushed the envelope by implementing various cutting-edge technologies, which later became mainstream. As one trend cements itself in the industry, another emerges, and right now there are plenty of developments in the gaming industry to be excited about.

Innovations like virtual reality (VR), augmented reality (AR), cloud gaming and Bitcoin games are major drivers in the gaming industry’s rapid transformation, allowing for greater accessibility and more immersive gaming experiences. Here’s a look at some of the factors that could change your perception of what gaming in the future could be like.

Gone are the days of static gaming websites where the same games with the same basic features are played year in, year out. Socially responsible gaming websites, like Health Games, are responding to emerging pop culture trends by constantly developing new games and themes. The new features implemented by these types of gaming sites could include anything from storylines and narratives to leaderboards, power-ups, and live games that simulate real-world gaming environments.

This trend-responsive approach not only gives regular players greater choice and better entertainment, but offers players who are mainly interested in welcome bonus offers a reason to stick around and explore other games, opening the market to new long-term players.

The gaming industry is one of the most prominent forces driving the evolution of virtual reality and augmented reality technology. For the avid gamer, nothing could offer a more authentic and immersive experience than being completely immersed inside the game world.

However, despite the incredible advancements being made in the field of VR and AR, these technologies are still often confused with one another. So before we delve into VR and AR gaming in the future, here’s a brief explanation of their key differences.

What is Augmented Reality? 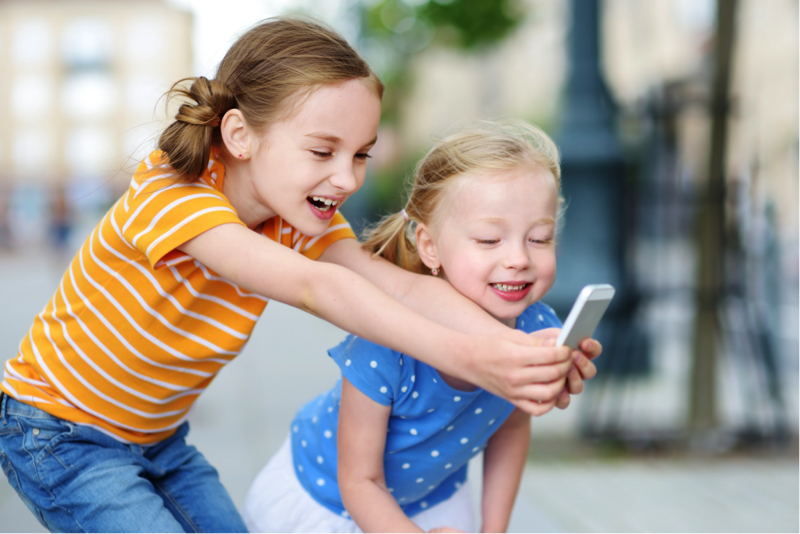 AR takes our current reality and adds a layer to it, changing, or augmenting, our experience of the ‘real world’. Thanks to the popularity of games like Pokémon Go, AR has gained a lot of attention in the past few years. The game became a global phenomenon within just days of its launch, but suffered a decline in popularity due to poor update management, overload on game servers and delayed regional releases. However, it has somewhat recovered some lost ground since the launch of the new and improved AR mode for iOS.

What is virtual reality?

Unlike Augmented Reality, VR gaming puts the user in a completely different environment through virtual reality headsets. These VR wearables block out the physical environment and transport the user to a digitally constructed, imaginary world in which movement and interaction with virtual features or characters is possible.

Although a wide range of high-tech VR gadgets are available, VR gaming has not quite broken into the mainstream, largely because of the high price associated with the hardware necessary for a complete VR experience. However, with cheaper and more user-friendly VR devices like Google Daydream View, the successor to the pioneering Google Cardboard, which was developed as a low-cost system to encourage interest and development in VR applications, this could well change. Being significantly cheaper, smaller, lighter and more portable than similar devices, the Google Daydream View has great potential to solve the problem posed by the cost and availability of full VR headsets. If and when more engaging content becomes available for the Google Daydream View, it could end up being one of the main contributors to VR gaming adoption in the mainstream.

The new ways in which Virtual and Augmented Reality technology is being applied to gaming—as demonstrated at this year’s CES in Las Vegas—is a clear indication that VR and AR gaming is developing fast. With this rapid development come innovative integrations, not only with other devices, but also with additional human senses, which is set to unlock a level of Virtual Reality that was once unthinkable. You merely have to look at single examples – like the game that lets you see through the eyes of a drone, or the prospect of smelling elements in a VR world – to become excited about what gaming in the future could be like.

Solving the problem of VR and space

Another problem – one faced by gamers and developers alike – is a lack of space. There are countless videos on YouTube of people running into walls while immersed in a virtual world, but the reality is that a bad safety record isn’t something devs want or need.

The solution to this problem may lie in the form of a nifty piece of technology developed by LooxidLabs. The LooxidVR brain-monitoring headset is capable of tracking eye movements and brain waves using tiny cameras and sensors, revealing where subjects are looking, and even how they are feeling about what they see. The idea is that players will eventually be able to participate in VR gaming without having to move at all. However, since the LooxidVR headset has only just been released, it may still be a while before we’ll see that kind of technology in the hands of gamers.

Mobile gaming is going even bigger 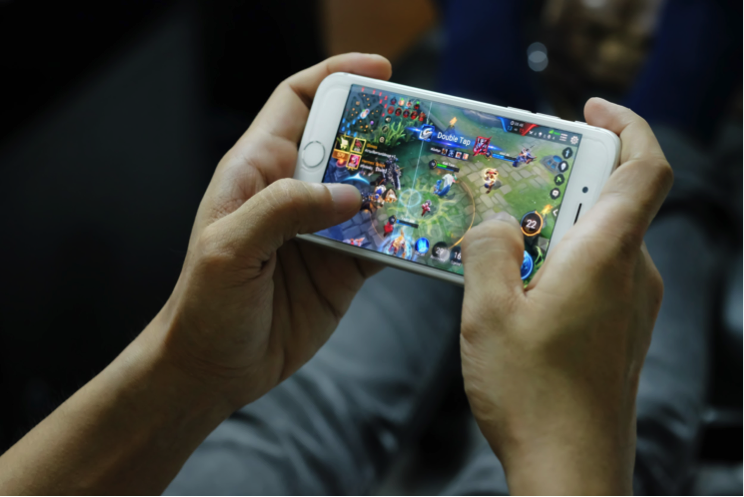 If we had to make a prediction about gaming in the future, it would be about the continued growth of mobile games. With the development of AR, the low costs associated with developing mobile games and the rising number of casual gamers, mobile gaming is expected to take an even bigger chunk of the global games market, which, according to Newzoo’s 2017 report, already sits at 43% with a 23.3% year-on-year growth.

Consequently, we’d expect to see even more brands making their PC and console video games available for mobile, more mobile-friendly gambling sites popping up and more gaming apps being developed to fulfil the growing number of smartphone users looking for ways to kill time on the go.

When Bitcoin began hitting the mainstream, many gaming sites were reluctant to associate themselves with this payment method. But, as with most forms of market disruption, it’s the consumers who drive the change. As the popularity of Bitcoin games grew and more players started demanding this payment method, many gaming sites started making Bitcoin work to their advantage. Not only does Bitcoin give existing users another way to spend, but its safety, security, and ease of use are luring in all kinds of new players from all over the world, allowing gaming sites to capture a wider audience.

The Bitcoin craze has also ushered in a new genre of games. Bitcoin games, like Bitcoin Billionaire—an idle clicker game built around the accumulation of virtual Bitcoins—and SatoshiQuiz—a quiz-based game where users can win Bitcoin for answering questions correctly—could be contributing to the surge of mobile gaming’s popularity. Despite Bitcoin’s volatility, gaming sites that use this cryptocurrency are expected to become even more widely adopted in the future.

Blockchain is turning gaming into a career

Blockchain technology and its use within gaming are changing the gaming landscape in an interesting way. Essentially, it’s turning gaming into a career, and putting more power in the users’ hands.

By making use of this technology, gamers can create their own platforms that are owned by the users themselves, allowing them to gain control over the rules and transactions, pricing, in-game currencies and more. This results in more consistency, flexibility, transparency, and privacy. With users having more power and freedom to develop and enjoy gaming on their own terms, traditional gaming companies will be forced to adapt and bring new dimensions to the gaming industry.

Cloud gaming is a game changer

Cloud gaming, sometimes called gaming on demand or gaming as-a-service, aims to provide players with a faster direct-play ability across various devices. All the graphic-intensive computations normally done on a game console or gaming computer are handled by remote servers, which are loaded with the gaming software. Essentially, the player’s device only receives the streaming video or files and sends the input commands from the keyboard, mouse or controller over the network.

This type of gaming has huge advantages in that it eliminates the need to purchase and install expensive hardware and software. This means that players can instantly start playing graphic-intensive games, once exclusively available for Windows PCs and high-end consoles, on the device of their choice – whether they’re running Android, iOS, Chrome OS or Linux. This accessibility opens the gaming market to a massive group of new users, especially beginners and those who prefer gaming on mobile devices.

With game-changing innovations like these, we wouldn’t be surprised to see a future in which the rules of the gaming industry are rewritten. This could ultimately force big gaming companies to rethink their strategies and adapt their products and services to keep pace with developing consumer trends and demands. Only time will tell where current developments will take us, but one thing is certain: we’re in for an exciting ride.