A feature writer who relies on their editor for story ideas will rarely be given the juiciest assignments; they are also handing over control of a vital part of their job to a busy person who, in all likelihood, is not unduly worried about the feature writer's wellbeing. Why put your professional satisfaction in someone else's hands when you can take charge of it yourself? The first step is to develop habits, such as those outlined below, that over time put you in the right place, physically and mentally, to pick up ideas for stories. 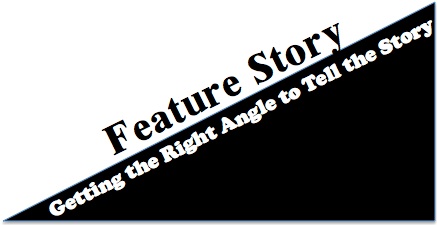 Anyone aspiring to get into the news media industry should be reading newspapers and magazines, listening to radio news, watching TV news and surfing the Net. In addition to keeping abreast of the news, working journalists spend time and energy each day sifting through media releases. This is necessary work but, for good journalism, insufficient because you are consuming what everyone else in the industry is consuming; it is stale air. If all you do is recycle it for readers they'll get legionnaire's disease.

This is unexceptionable advice in a writing textbook, but an alarming number think the two activities are unrelated. Supermodel Elle MacPherson was once quoted saying she did not read books but with her own she'd make an exception. Writing and reading are joined at the hip, as the prodigiously popular novelist Stephen King says: â€˜If you want to be a writer, you must do two things above all others: read a lot and write a lot.’

DRAW ON YOUR OWN EXPERIENCE

The question of when to put yourself in a feature story is discussed in chapter eleven, but it is entirely legitimate to draw on your own experience for story ideas. Every person's life opens up some possibilities even as it closes off others. You may come from a small country town; you may have grown up in a sports-mad family; your brother may be intellectually disabled; you may know everything about the roots of hip hop music. Any of these experiences would give a head start in writing a story about these issues. One of the first newspaper stories I wrote as a freelancer drew on my university holiday experience of working in a geriatric nursing home.

TALK TO ANYONE AND EVERYONE

First and foremost, all good journalists possess a burning curiosity about the world around them and the people in it. Journalists develop contacts in the areas they cover, but you can pick up leads for stories wherever you go. In everyday life you meet a variety of people, doctors, greengrocers, video store assistants, bartenders and so on. Talk to them, show an interest in their lives, tell them about yours. You will be surprised where these conversations lead.

One of life's pleasures is the idea that pops into your head; one of life's frustrations is how easily ideas pop out, never to be seen again. Catch them before they do, and jot them down in an ideas file. Don't make the note cryptic; otherwise, in a couple of weeks time you will need a cryptographer to understand it. Clip newspapers, magazines, journals, reports and the like for potential story ideas for your ideas file. Likewise, file ideas gleaned from conversations with sources. Left in your notebook, they will soon be overrun by the next dozen interviews. The ideas file should be organised so you can keep an eye on any that hinge on a particular future event (such as the 20th anniversary of the Queen Street shootings in 2007) or relate to a news issue that is current and needs immediate attention.

WORK WITH YOUR EDITOR

No matter how many ideas you generate you will still be given assignments by editors. Discuss their ideas and yours; two minds can be better than one. An unnecessarily sharp divide has developed between journalists and editors in many newsrooms. Remember that most editors have been writers and have much to offer journalists during the reporting and writing and editing process.