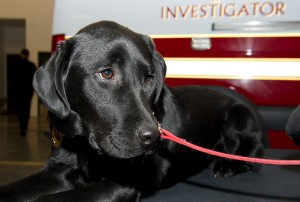 I am writing this article for tough firefighters, but homeowners and commercial premise owners can also find something worthwhile in it. The truth is, gathering more and more knowledge on fire safety helps because it lowers the odds of falling a victim to a menacing fire.

Detecting a fire or a potential source of fire is the first step of extinguishing it. Firefighters often use dogs to detect fire. If you work in a fire department, the odds are high that you've already had one. But assuming you don't have one, there are various programs that can help you.

Neither the programs nor fire departments use the word "dog." They do during casual chatters but not when they document their annual success reports. Then they use terms like accelerant detection canine. The term refers to dogs that are specially trained to detect possible sources of fire.

How to find one?

As I've just mentioned, accelerant dogs obtain special training. That's the reason not everyone roams on the streets with them. The NFPA is about to start a new project, in which it'd address this issue. I'll discuss it in lengthy details later, for now, what you need to know is ATF or the Bureau of Alcohol, Tobacco, Firearms and Explosives offers explosive detection and accelerant detection canine training totally free of charge.

Firefighters put arson dogs to use. They call them K-9 units. The Arson Dog Program started its journey in the early 90s and the State Farm sponsored it. Today, more than 350 arson dog teams operate across 44 states. Different states have different training specifications, but on an average, a K-9 and its handler completes a 4-5 weeks to 3 months long training program.

The arson dog program uses several dog breeds. The Labrador may be the most common breed but German Shepherd and Doberman Pinscher are also used by the K-9 handlers. Even though dogs from any breed can be trained, the sporting or herding breeds score better than other breeds when it comes to receiving training.

The training consists of various levels. The trainer puts the dog into a container with only two drops of partially evaporated gas in it. Next, he offers the dog some food. The whole purpose of this is to help the dog relate food to the smell of gas. The dog learns smelling the gas is an activity and receiving food from the trainer is the reward.

Among the many benefits of using accelerant dogs, one is they can detect fire sources that even machines fail to detect. Labrador Retrievers are so common in the program because they can smell better than other breeds. When taken to a fire scene, dogs from this breed can categorically identify each separate odor that stems from the fire and the surrounding environment.

For fire detection, firefighter often search fire scenes, various equipment and vehicles. During a fire search, an arson dog checks out a considerably large area in half the time it takes for a human to check out.

The 2014 edition of NFPA 921 lays out guidelines for Fire and Explosion Investigations. The document identifies arson dog teams as "properly trained and validated ignitable liquid detection canine/handler teams." The NFPA will use the 921 code to develop an ANSI approved standard for the accelerant detection canines and their handlers.

This initiative will hugely benefit the arson dog teams. The handlers will have a better understanding of the training delivered to the K-9s.