My Ex-Ex is the latest Canadian cinematic offering to the romantic comedy genre. Written by Canadian actor and screenwriter AndrÃ© Bharti, who also wrote the 2013 coming-of-age film Fondi '91, Bharti not only wrote My Ex-Ex, he also stars as one of the film’s romantic leads in this modern day love triangle. Bharti has described My Ex-Ex as Pretty Woman on crack, which is telling of his tongue-in cheek-style that's prevalent in the film. 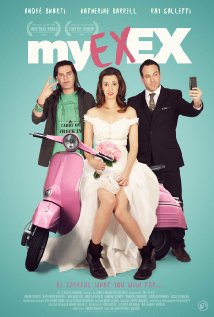 With something for everyone, My Ex-Ex is a romcom with strong female characters for the ladies and a buddy film for the fellas. Bharti's writing is refreshing and complex; he also happens to delve into areas that romcoms usually don't touch on, like nuanced love, debilitating insecurity, and psychic prophecy.

Shot in Toronto, My Ex-Ex features an all-star Canadian cast of talented newcomers and veterans to the film scene. Canadian comedic fixture Luba Goy from Royal Canadian Air Farce fame helps to set the tone of the film and is the catalyst of the love triangle fiasco.

The film begins with heroine, Mary (Katherine Barrell), convinced her long-term boyfriend, Ted (Ray Galletti), is poised to pop the big question. When the superficial Ted asks Mary to meet him for dinner at Gaston's, the trendiest eatery in town, Mary's suspicions are solidified. However, dinner doesn't go as planned when Ted decides to end the relationship rather than propose, leaving Mary confused, distraught and heartbroken.

Mary languishes in her despair at home until her gal pals, Sandra (Emily Alatalo) and Becky (Tamara Durate), arrive and try to lure her out of her misery. Suggesting a trip to local Psychic Mona Lisa, Sandra and Becky get a reluctant Mary to agree to leave her abode and venture out into the world yet again.

Psychic Mona Lisa assures Mary that for a small fee she can whip up a spell that will enchant Mary's ex and lead him back to her. This is music to Mary's ears, and she quickly pays the $50. Making good on her offer, Mona Lisa casts the ex spell for Mary, one small detail though, the term ex is vague and Mary has more than one.

A few days later, Mary has a chance encounter with her ex-ex Patrick (AndrÃ© Bharti), a good-hearted and sensitive man confined in a frat boy's mentality. We soon discover that Patrick hasn't been able to recover from his break-up with Mary from years past and he isn't going to let her get away this time. This, despite the advice of his good friends, Rob and Nathan, played by actors Randal Edwards and Alastair Forbes, who remind Patrick that things didn't work out so well last time.

Cue the re-emergence of Ted, who now claims to want her back. Mary is now the central figure in a love triangle of exes. Who will she pick? Are either worthy of Mary's love?

My Ex-Ex offers a clever and touching spin of one of the oldest story tropes-unrequited love. Do you pursue the love you want or the love you deserve? AndrÃ© Bharti’s writing examines love from both sides and genders giving the film a balanced and detailed perspective.