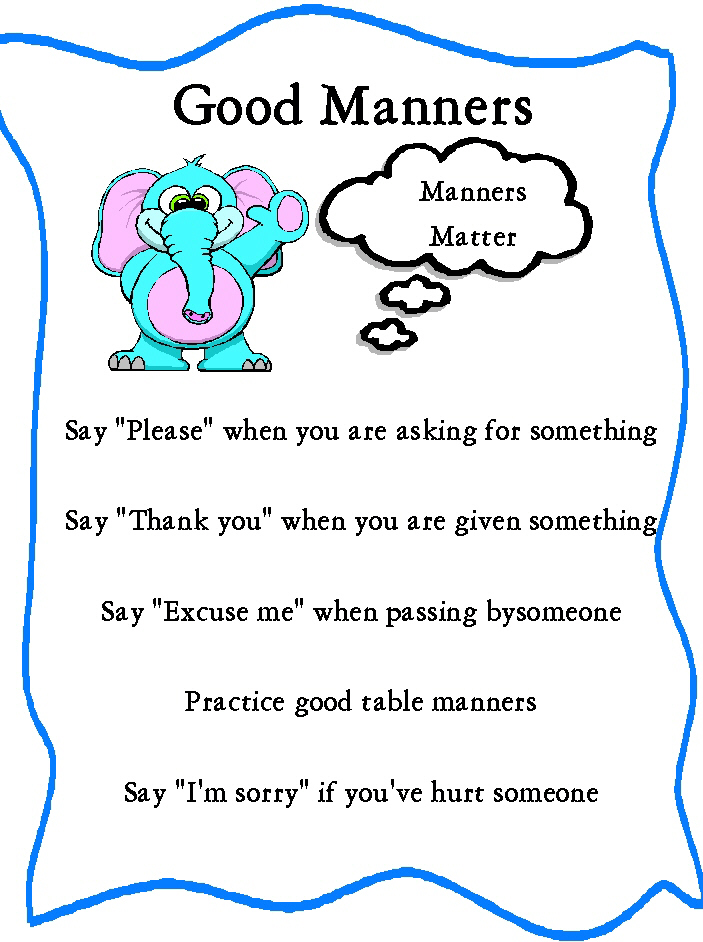 A while ago we published a post about Subjects That Should Be Taught But Are Not. In that article, we talk about social skills and things like "what to do if a roommate skips his half of the rent." I'd like to amend that article to include a section on manners.

A couple of years ago, when Arizona Governor Jan Brewer infamously wagged her finger at President Obama a flurry of articles talking about manners and the rewards offered to the rude, particularly to those who operate in political circles.

It isn't just politicians who get away with rudeness, though. It's all of us. Even I'm guilty of sometimes forgetting the rules of polite society. Still, there are certain behaviors that I would like to see obliterated. And, while I appreciate the open discourse many of us enjoy and I don't want to revert back to a completely repressed society, I wouldn't mind if we all adopted a few of the following habits.

Chewing Then Talking, The Manners of Food

I admit that I am guilty of this one a lot. I'm out to lunch with friends and, while I'm chewing my food a thought that I have to share right now pops into my head. Instead of finishing my masticating (and letting the conversation naturally veer somewhere else before I've had a chance to share my brilliance) I put my hand up in front of my mouth and say whatever it is I've decided to say.

While I'm still taking care to keep people from "see-food"ing, this is hardly polite and I know I hate it when others do this. Let the conversation go. Chew your food properly, swallow it, then talk.

While we're at it: if a bite in your mouth goes awry (it's happened to all of us), spit it into your napkin, not onto your plate.

Saying Thank You, The Manners of Gratitude

"Thank you." It's so easy to say and yet we so very rarely do. Someone holds a door for us and we rush past, not even acknowledging the holder. A server brings our food to us and we don't even look at her. Seriouslyâ€”let's do better and teach our kids to do better. A quick "thank you" takes less than two seconds to say.

While we're at it, a return to the thank you note would be nice. It's easier than it has ever been. You can send one of the greeting cards from Hallmark eCards from your phone. A thank you note or card (digitally based or tangibly based) shows the recipient that they matter to you.

Saying "Excuse Me": The Manners of Self

There are three primary situations in which one should say those two little words: "Excuse Me"

When you are abruptly stopping a conversation, either by walking through the middle of it or by leaving it entirely to do something else.

We've all been there: the just-ended work meeting that we're dying to leave but can't because two people are chatting in the doorway. Most of us will sort of bumble through, muttering apologies, saying "oops," etc. Instead, simply walk up the chatters and (with a smile on your face) simply say "excuse me, I need to get through." Then, when they move, say "thank you!" and walk past.

After the occurrence of a bodily function.

This, in particular, needs to be drilled into children as early as possible. Yes, bodily functions are completely normal. Everybody has them. Still, sometimes they take us by surprise and we aren't able to excuse ourselves before the cough, sneeze, burp or passing of gas erupts out of us. If this happens, simply say: "Excuse me!"

And don't forget to cover your mouth when you burp, cough, or sneeze (if you can get your arm up in time)!

There are, of course, other manners and common courtesies that deserve a comeback but these, I think, are the most important. Which manners do you think most deserve to be reintegrated into our society? Do you think we should go as far as this French cafÃ©?