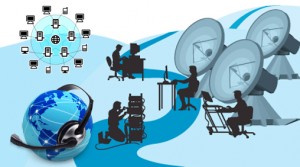 2016 is truly the year that makes us all feel the future is drawing near. Science fiction will have become science fact by the end of this year, when people will be able to use virtual reality technology, when smart technology enables our dishwashers to reorder their own soap. When we look into the future, seeing all the breakthroughs, ideas, and devices top software companies are going to release into the world, there are two things that come to mind. Intelligence and freedom.

Bandwidth and processing power are increasing constantly, meaning that our services, machines and even our chatting apps are becoming more efficient and capable of handling complex tasks. Furthermore, our technology is liberating us as we speak - people feel less shackled, regardless of whether we are talking about cable subscription or phone charging, things are more mobile. Here are some of the mentioned devices that will soon become mainstream, changing our lives forever.

Virtual reality is becoming a reality

Each and every person all around the world, including both tech geeks and your average citizen, are getting excited about the prospect of virtual reality becoming real. There are thousands of people who have already pre-ordered virtual reality devices and can't wait for them to be finally released for everyone to use. The first virtual reality devices that will arrive this spring are the long awaited Oculus Rift headsets. Next in line come the Sony's PlayStation Virtual Reality and HTC's Vive.

Unlike the already available smartphone headsets such as Samsung's Oculus Gear VR, new technologies with advanced imagining and sensors located in dedicated headsets are the real deal, allowing us to experience the immersive feeling of being located inside a teleporter. We are being presented with "Augmented reality," that is a combination of views from our real world and virtual reality. Some of the biggest companies including Microsoft and Magic Leap and others are developing this brand new technology that is not quite there yet.

Games and other similar fantasy simulations are the most appealing things for the use of this technology. On the other hand, given the fact that there are big investments in 360 degree apps and videos, we are already able to take a glance at these new realities at concert shows or when attending business meetings we would have otherwise missed.

Get prepared for the exciting VR technology. If you own the newest Samsung Galaxy, you can get the VR gear for it for $100. On the other hand, if you own an iPhone or some other Android phone, you can give Google Cardboard a try for only $20. You can get a swivel chair, as it will make it a lot easier to spin around in the environment without the risk of hurting yourself. You might also want to get some Dramamine.

Smarter and safer Drones for the future

There is not a single person in the world who does not enjoy beautiful photos or videos made from an aerial point of view using a drone. Still, not everyone can pilot a drone and use it to its full capabilities. By the end of this year, we will probably look at drones as if they were cameras, more than flying devicess, since they have evolved into smart gadgets and compensate for any mistakes inexperienced or bad fliers make.

One of the drone developers, a company called Lily, is planning on developing waterproof models that can be launched by flinging them into the air. The smart design will allow these drones to follow their users while they are kayaking, sunbathing at the beach, or allow them to take selfies while skiing. GoPro is also planning on supplying the market with a brand new drone with the name "Karma". The action camera giant has not yet issued out any information concerning this project.

If you are one of those people who find it hard to fly drones around, don't buy any of the currently available models. Unless, of course, you are ready to pay for lessons and learn how to fly one of these bad boys. Another issue with the currently available drones is that they are crowdfunded and it can take months for them to be delivered to you, if they get delivered at all. Furthermore, a lot of countries don't have laws for these kinds of aircrafts and they may get held up at customs.

Luckily, by the end of the year, all of these obstacles are likely to get surpassed and you'll be able to become a proud owner of your own small aircraft. You should also make sure to check all of your obligations and the rights you have as an owner of a drone.

Everything will be voice-operated

Here comes the paranoia: after this year is over, almost all of our everyday devices will be voice operated. Our gadgets will be listening in on us, so to speak. All of the voice controlled electronic devices are going to get enhanced accuracy and improved intelligence that will be perfected by the end of 2016. Giving orders and controlling gadgets by talking will open up a much more natural approach to interacting with devices not suited for keyboards, such as sound systems, household electronics or TVs.

Voice was brought back to the spotlight in 2015, when Microsoft released its Cortana virtual assistant along with Windows 10, while at the same time, Google Now and Siri were used for TVs and cars. After this year is over, you can expect voice control to be more sophisticated and applied on a wide range of devices, gadgets and computers, including a toy powered by IBM's Watson that will help it answer all of the necessary questions.

You should find a platform that suits you the most and stick to it for as long as possible. The more you use a certain voice system, the more it gets to know your voice and talking patterns, so if you switch between Google's, Apple's or Microsoft's voice command system, you won't be able to see its full potential.

Your brand new best friend robot is just around the corner. After 2016, messaging as we know it will seize to exist, and it won't be just used to send various emojis and text to your friends and family, but they will also be used to find bot assistants that know it all. Facebook's brand new messenger app is already in beta testing and it's possible to ask it to buy gifts for your friends, book reservations at restaurants or simply ask it for some simple information.

There are many rumors spreading that Google is in the race too and that they are getting ready to launch a similar app. Apart from these two apps, there are also brand new messaging software that have evolved and incorporated brand new features. It's all about convenience, and in the future, our messaging apps will be able to translate our messages, pay our bills, book appointments and much more.

To use these messaging apps effectively and see their full potential, both you and your friends will have to get on the same app on all of your devices. No matter if you have different apps that have similar capabilities, it will be hard for them to communicate properly and use all of their features.

The current USB ports you know and use are a thing of the past. Personally, I am glad to hear this since I hate the current ones (and I'm probably not alone). Last year, the type C USB ports appeared on various laptops such as Apple's MacBook, and brand new phones such as Nexus 6P. These brand new ports are much faster and smaller than the current ones we all use.

By the end of 2016, all of new devices will include this USB port and they will also turn up in hard drives, monitors and basically, everything else. One of the best features of the new type C USB ports is the fact that they can power two-ways. This means that one port on a laptop is capable of charging the battery and connecting an external hard drive at the same time.

This will definitively result in using fewer cords and faster charging. You can say goodbye to all of your old USB cords as they will mostly be ruled out completely.

The future surely seems exciting, and I personally can't wait to try out all of these things. I still can't believe that such technological advancements will soon be a part of our everyday reality. Things that amazed us when we saw them in sci-fi movies are soon becoming a reality and everyone is getting hyped up to start using them.

markjohn is author at LeraBlog. The author's views are entirely their own and may not reflect the views and opinions of LeraBlog staff.