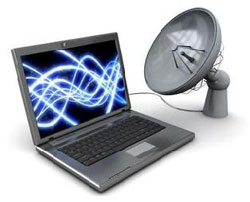 Nowadays, if you want to get access to the World Wide Web, you have many options to choose from, each, obviously, with its advantages, drawbacks and different potential applications. Let us compare two of the most popular connectivity systems: DSL and satellite.

You have surely heard of DSL connections, but what exactly are they? DSL comes from "Digital Subscriber Line" and it is a form of broadband connection. This means that it is significantly faster than traditional cable-based Internet connections.

The main advantage of this technology is that it enables using the same cable infrastructure for telephony and Internet. Furthermore, the two types of services can be used in parallel: you can make or receive calls while staying connected to the Net, so, you basically do not need too much wiring in your home or office.

While it may resemble the old dial-up technology, DSL is much, much faster. All you need in order to connect to the Internet is a special DSL modem.

Satellite Internet: What Is It?

For this type of connection, you do not need any cable. You need a satellite antenna (you may be already using one, for receiving TV transmissions) and, obviously, a modem, plus some special software.

Data is received via electromagnetic waves, from satellites up in the orbit, and it goes back the same way. The most impressive feature of this technology is that you can basically get Internet access in the middle of the jungle, if you want it. These systems are not difficult to install, maintain and operate.

Satellite Internet has one more quality: it is surprisingly fast. If all goes well and there are no serious weather issues, you can upload and download big files, watch movies or run various online applications at a high and relatively constant speed.

Yes, even with satellite Internet connectivity, there are some problems, namely higher costs, data transfer latency and some weather-caused issues. But, the latter technology brings numerous advantages over other networking means, including DSL: