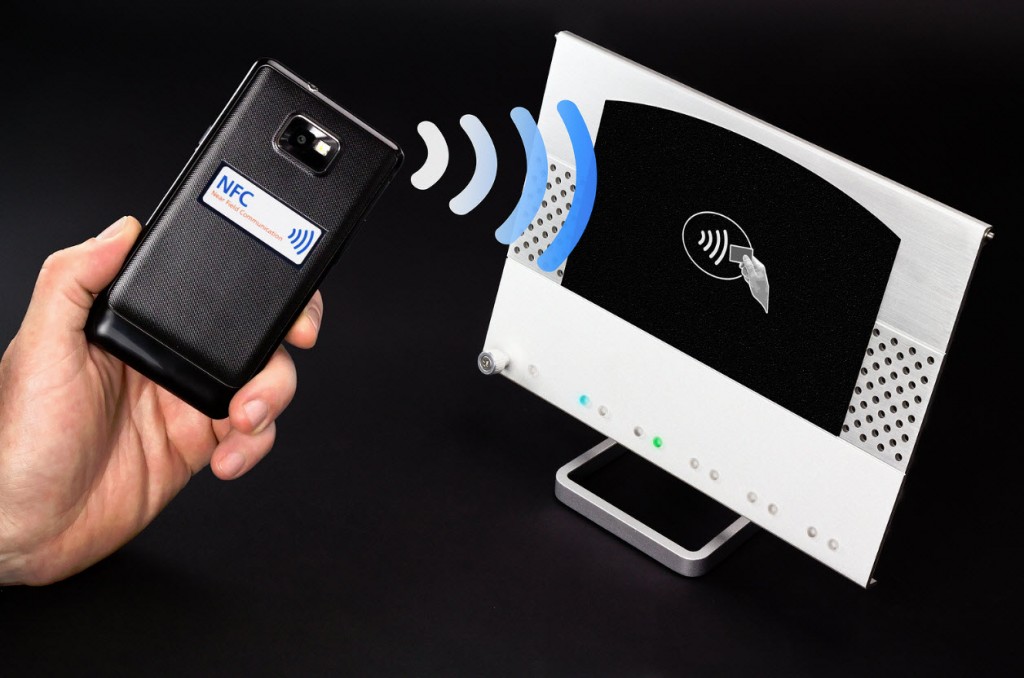 What possibilities of your smartphone are you ready to use nowadays? Yes, you are aware that the mobile phone has become more than a simple device for calls and sending of short text and multimedia messages. With development of networks and computer science these devices have become the primary window for reaching World Wide Web. High end devices such as Samsung Galaxy S5, Google Nexus, Blackberry Bold 9900, LG G3 and others are enriched with a new technology which requires only one simple touch in order to perform or exchange information. The new technology is called NFC. And for what exactly these three letters stand for? NFC is short for Near Field Communication, and the name tells you all, it allows communication between devices on small distances. Thanks to NFC technology we will have the possibility to interact with many different devices in our proximity.

How small is that distance you wonder? Well, NFC chips can communicate with one another on small distances of a few centimeters. NFC allows mobile devices to read information compiled in NFC tags. NFC tags can be put on virtually everything. They can be put on different objects such as posters, magazines, bus stops, medical tags, different product packages etc. NFC allows the device such as smartphone to gather data from NFC tag or other NFC device. Imagine the possibilities? All you have to do is touch another NFC device or tag in order to start communicating.

However, this actually isn't a new technology.

NFC represents an evolution of existing specification of RFID technology and payment tracking system. Basically it represents variation of other short range wireless technologies that are being used around the world, especially in US, Japan and Europe. Similar to RFID, NFC can quickly transfer information between devices that are close to one another. You can transfer data such as text, images, URL or some other data by simply holding you smartphone near so called smart tags. Comparing to Bluetooth technology which has a higher range, NFC supports lower transfer rates, but it uses considerably less energy and two different NFC devices can exchange info in a single second. The biggest advantage of NFC to similar technologies such as Bluetooth is that it does not require devices to paired.

The basic use of NFC is made from payment systems such as wave-to-pay, which allow connection of a credit or debit card to an NFC device. This also allows creation of system for identification in public transport or entrance to secure areas such as work offices, NFC business cards, etc. In some parts of Asia, considerable amount of smartphones have built in NFC technology, while Europe and US still has to catch up.

NFC works on 13.56 Mhz frequency with data transfer of 424 kbps. This surely isn't a big number, but it is enough considering that the amount of information sent via NFC technology is really small, just a few kilobytes.
NFC devices can work in a few different waves:

The information and communication is based on the principle of magnetic induction which is created between two antennas of the devices. Between these antennas a field is created which can transfer electric impulses - data. There are two different microchip types - the receiver and transmitter. The receiver is passive and it doesn't require a power source, while transmitter needs one. Receivers are read-only type of microchips which have data built-in during manufacturing process. These information can be different prices, discounts, information about different events, collage classes schedule and similar.

The receivers can be programmed with static content or use an additional option, a device which can be connected to the Web, with which you can dynamically manage data located in the microchip. NFC receivers are flexible for install, and that's why they can be found as stickers or small plastic objects. Also transmitters can also work as receivers, and that's why two smartphone can peer to peer communicate with one another.