When you think of spas you think of a place with various rooms offering pampering treatments, plunge pools and spaces to access your inner self. They are havens for the stressed and the tired - those who need the knots in their shoulders kneaded out by expert hands and a body or facial wrap or mask to feel revitalised.

These havens of relaxation have drawn people in since prehistoric times. People were drawn to natural healing springs and performed health and beauty rituals. The popularity continues today and people have a wide variety of spa treatments and regimes to choose from, but the best ones are situated in an environment that uses its natural surroundings. These spas are dedicated to creating unusual experiences for their guests. Here are five spas around the world which uses environmental elements to create peace and tranquility. 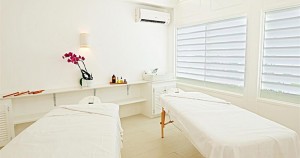 Sun, sea and spa. It sounds like a dream does it not? But it's not. It's reality. There are many beautiful beaches in the world and the island of Barbados has more than its fair share. So if you're in search of a holiday that contains the three S's, head to Couples Barbados resort. Treatments include a massage in a private Cabana with scenes overlooking the coral reefs and reflexology sessions under palm trees. Secluded pools provide an oasis of calm for those wanting a dip after a glorious day of basking in the sunshine. Spas in Barbados are perfect for couples who are getting married on the island (for pre-wedding treatments) or on their honeymoon. 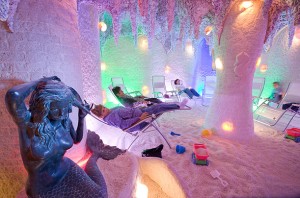 Salt is considered a symbol of friendship, eternity, wisdom, and health. Poland and Chicago have embraced that idea and created salt caves. Chicago is known as the Windy City, but it could just as well be given the name of Salt City thanks to the Galos salt-iodine caves. The structure of the crystalized salt caves is based on a Ukrainian technology. The slat cave in in Poland looks like a grotto with soft lighting and a mermaid statue. The resorts have an authentic sea microclimate which provides its spa-goers with healing effects that could rival the Black Sea. 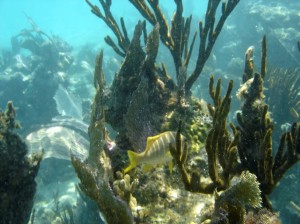 Located in the heart of the Indian Ocean, the Maldives is a popular hub for spa lovers and deep sea diving enthusiasts alike. So The Lime Spa at Huyafen Fushi has cleverly combined the two with the world's first underwater spa. Natural treatments are provided with a view of the ocean bed. The aquatic surroundings are meant to evoke a sense of serenity and calmness. The interior design takes its colourful influence from the coral, kelp and sea sponges. 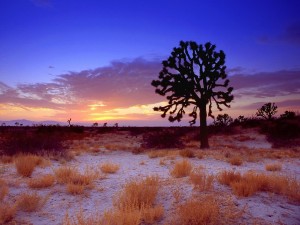 Could there truly be a tabernacle spa set in the heart of mesmeric Mojave Desert? Yes, thanks to George Van Tassel. Having worked as an aeronautical engineer and test pilot for Howard Hughes and a key member in the UFO movement, Tassel created the Integraton. The giant dome structure offers sonic healing sessions to those seeking a one-stop shop for physical and spiritual healing. 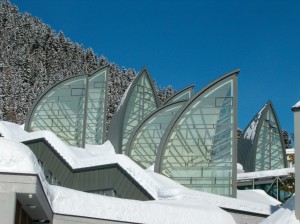 Mountains are not just meant for climbing. They are meant for calming; in Switzerland they are anyway. The Tschuggen Bergoase spa is built around surrounding villages and natural mountain environment but it's worked hard to not stick out like a sore thumb. . They provide an exceptional view of the rugged mountain terrain and allow natural light into the treatment rooms that spread over four floors â€” some of them underground and set into the mountain.