Initially, shaving dealt with a sharp object, soap and water. One got shaved hoping that they wouldn’t be left with a scar. Today the shaving experience is totally different. The greatest engineers are backed with loads of cash and they aim to get small, powerful and efficient motors in your hand. The motorised devices that these engineers create can quickly deliver a clean, close shave.

Yes, we were still shaving centuries before razors and electric shavers came to be. We’d get rid of facial hair in different ways. In the Stone Age, we would rip our facial hair using clams. This advanced to pumice stones, hair-removing creams and various kinds of blades in Ancient Egypt.

In the Bronze Age, we’d sharpen obsidian tools to use for shaving. During the Roman Rule, Romans made use of nova cilia with a blade. While in the 18th and 19th centuries, we started seeing sharp, exposed metal blades. You can learn more about the history of shaving here on Wikipedia, this post is about electric shavers and their evolution.

History of the Electric Shaver

Use of safety razors gained remarkable popularity in the early 1900s, thanks to King C. Gillette and the Kampfe Brothers. However, electrics were deemed an advancement in the 1920s when they truly came to light. The first safety razor was invented by Gillette. 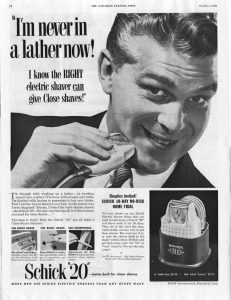 Jacob Schick asserted that a man could live to 120 if he was shaved properly. In the late 1920s, he invented the first electric razor. Not having to spend on shaving cream and other products should have made this electric device a winner.

However, Schick’s electric razor wasn’t a success. His first iteration was a bit clunky, you’d need both hands to operate it. Finally, he perfected the design, making it all fit in a single device. Back then, it sold for $25 and every man wished to have it. By 1937, Schick had sold close to 1.5 million units. Schick never experienced the comfort and riches of his rival, King Gillette.

Unfortunately, Jacob Schick passed away in 1937 just when his firm was booming. His invention lived on and other companies continued to carry electric shaving to new heights. During the same year, Remington came to the forefront with their Close Shaver. The Model E Close Shaver comprised a micro-screen foil on the blades, allowing for more comfort in the shave.

In the 1800s, Remington started off as a firearms manufacturer and then moved to typewriter manufacture, introducing the QWERTY keyboard. Later, they started manufacturing punch-card calculators, sewing machines and personal care products.

Alexander Horowitz, a Dutch engineer, was working for Philips- a company that begun by manufacturing light bulbs. They then broadened to consumer and industrial electronics. Horowitz explained to his bosses a new electric shaver which he nicknamed ‘the cigar’ for the shape. As a result, The Philips Company introduced rotary blades in 1939.

The marketplace turned into a head-to-head battle, forcing customers to decide between Philips’ circular blades and the front-back blades. One system was round with whirling blades while the other was rectangular with a blade which shifted back and forth. The rotary’s selling point was that it was relatively smaller. It could thus get to certain facial parts that others couldn’t.

Electric shavers of the 40s and 50s were made of Bakelite plastic and metal, and were often large. They were powered by cords.

Companies such as Remington were leading the way with their battery-powered razors and rechargeable batteries. This was greatly important for convenience and cost as well. Philips revolutionized the game in 1966 by adding a 3rd head to the rotary model. This is still the standard we have today.

Panasonic began by manufacturing bicycle lights, before they dived into personal care products and electronics. Their electric shavers began as the ‘National’ brand in America. However, these shavers were still referred to as Panasonic around the rest of the world. They started manufacturing shavers in 1953, initially in cooperation with Philips. Eventually, they headed out to manufacture on their own.

Panasonic manufactured numerous models, including the Micky Pal- a compact foil, slotted head shaver with 5 sides- made in the 60s. Among the notable collaborative projects between Panasonic and Philips was the Philishave Rotary ES-77, made in 1977. Under the ‘National’ name, they manufactured over 200 shaver models.

Germany’s Braun was initially a radio-maker. They introduced the first all-in-one entertainment device; a multi-band receiver that had an inbuilt record player. Upon the onset of the World War II, Braun’s Frankfurt facilities were destroyed. The company’s executives made use of the post-conflict rebuilding efforts to branch into other product categories. These included a foil-based electric shaver.