Like so many people, you’ve probably struggled a great deal while trying to quit smoking. Maybe you’ve quit smoking a hundred times in the past but it just doesn’t seem to stick. Instead of attempting to stop using the same tired methods that don’t seem to work for you, you should switch over to vapor instead. You’ll eventually have no problem giving up cigarettes altogether. 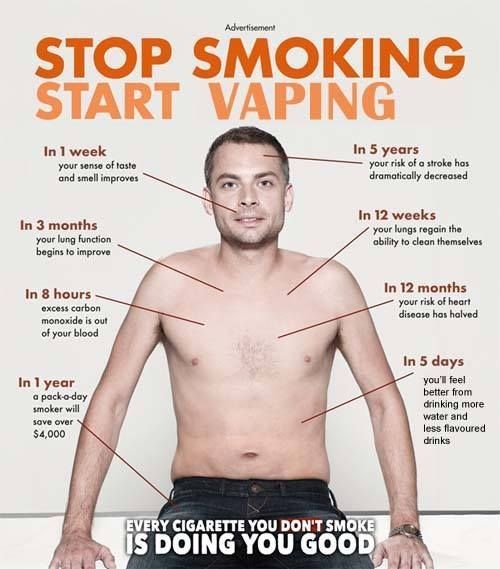 Vaping is a great alternative to smoking cigarettes. When you inhale the vapors from an electronic cigarette, you’ll still get the full impact of nicotine without having to inhale all the toxic carcinogens typically found in cigarette smoke. By going this route, you’re making a safer and healthier choice. Eventually, when you’re strong enough, you can begin lowering your nicotine levels until you switch over to vapor that doesn’t contain any nicotine at all.

With that said, let’s take a look at a few reasons why it’s smart to quit smoking while vaping.

First and foremost, we might as well get the money issue out of the way. If you live in one of the bigger states like California or New York, you’re paying an arm and a leg in taxes when you buy cigarettes. In other parts of the country, the taxes are less severe, but they still add up and take quite a bit of your money.

On the other hand, vaping is a lot more affordable. As you slowly begin to wean yourself off the nicotine, you’ll slowly but surely vape less than you previously did, so in effect, you’re going to be spending a lot less money. With cigarettes, you may try to cut down and you may even pull it off for a little while, but you’ll eventually hit a stressful day, week, or month and immediately watch your cigarette count rocket back up to normal levels.

As you can see, with vaping there’s an actual exit in mind. You will cut down as you lower your nicotine levels so you will spend less on e-liquid. This will obviously save you serious money over the long run.

If you’ve been smoking for many years, your body has developed muscle memories while smoking because you repeatedly take the same actions over and over again. When you first quit smoking, it’s often difficult to stop reaching for your cigarettes, going through the motions of lighting a cigarette, taking the cigarette to your lips and inhaling, flicking ashes, and many other memories built into this habit.

Some smoking cessation methods require a prescription. Repeated doctor visits and visits to the pharmacy can be really annoying. Many people end up giving up because of the major inconvenience.

Vaping, on the other hand, is simple. There are no prescriptions involved and you can have everything mailed directly to your front door. It’s such a convenient option and a great way to quit smoking over the long term.

According to My Freedom Smokes, providing info about how the kanger dripbox is inexpensive, vaping has made it easier than ever to quit smoking.