The year 2002 was to witness a designer jeans boon as had never before been seen. The forerunner in designer jeans which surfaced with phenomenal effect was the now-familiar Hudson Jeans brand. Hudson Jeans was the brainchild of CEO Peter Kim, who conducted some analytical studies of the fashion world. His attempt to create a creative line which would sustain itself even in the light of changing fashion styles and aggressive competition came into fruition when he invented the Hudson Jeans brand.

Fashion is not just a statement; it is a window into the soul of those who wear that fashion. Hudson Jeans grew and expanded quickly in popularity, its customer base of predominantly teenagers growing exponentially. What stimulated the growth of the Hudson jeans brand? The same thing that teens have been reacting to for generations: a healthy presence of peer pressure and a value-adding style which few could replicate.

The casual utility jeans went on to transform into a high-end glamorous designer jeans-wear. Predictably, Hudson Jeans have come of age. In fact, some celebrities will not be seen without a few pairs of Hudson Jeans in their closets. As if often the case with fashions, celebrities have helped Hudson Jeans on their way to success through projecting a glamorous and often-envied personal life. 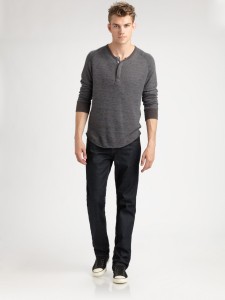 Hudson Jeans address the needs of both the formal and the casual wearer. In fact, the brand can be worn equally by both sets of people with no conflict. Those who need to dress formal in their Hudson Jeans only need a nice jacket or blouse, while those who want the casual look can dig out a wrinkled t-shirt from their closet.

Hudson Jeans has undergone a subtle shift in styling and tailoring with the present day collection being an imperceptible blend of the esthetic with the trendy. This unique coupling gives it an appeal which few can resist - hence the near complete market domination by the inimitable Hudson Jeans collection!

The source of Hudson Jeans quality comes in the way of pride and consistency. Hudson Jeans are produced and manufactured in countries like Japan and Italy, countries which have always been known for the quality and pride they infuse in their products. The detailing adds to this quality. Through double-seam stitching and the addition of designer rivet buttons, Hudson Jeans transform even the most mundane cuts into high-quality jeans that appeal to a person's sense of style and aesthetics. The color choice for Hudson Jeans is extensive and adds to the jeans' appeal. Ranging from the easy shadowy grays and blacks to the aggressive reds (and everywhere in between), Hudson Jeans has a color for everyone.

The future challenge of Hudson Jeans is to continue to appeal to its main demographic (the teen) while reaching out to adults in search of a subtler, more down-to-earth style. With such a heterogeneous mixture of potential clients, the powers behind Hudson Jeans have their work cut out for them as they try to address each customer's wishes with an open mind.

As for the customers, the future will continue to be about choice. Choosing the right pair of Hudson Jeans is a process not to be attempted by someone without some pre-cognitive idea of what he or she is looking for. The popularity of the brand, along with its immense variety of styles, colors and designs, make it almost impossible for shoppers to sift through a rank of Hudson Jeans and go home with just one!