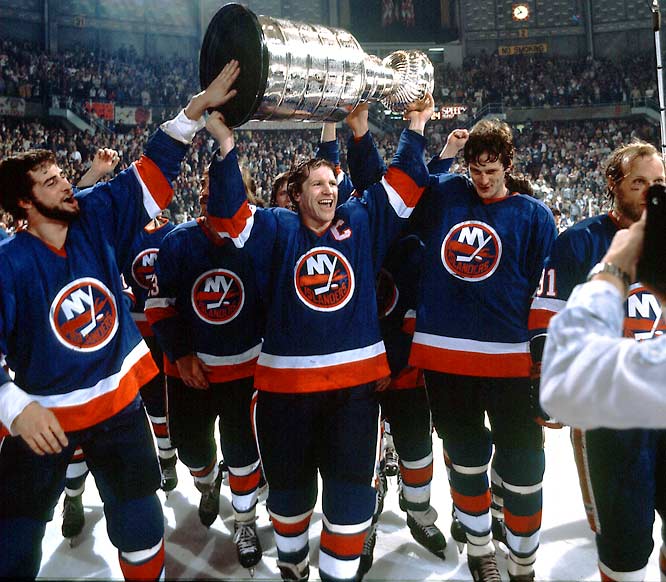 It's an NHL right of passage for each player on the championship team's roster to spend a day with the Stanley Cup. A fair amount of them spend the day staring at it in the living room, but that's no fun, now is it? You can do that with any trophy!! Here are some of the craziest things ever done with the Stanley Cup.

Mark Messier was no stranger to a day with the Stanley Cup, having won six of them in his career. His third, however, was particularly memorable. To celebrate the Oilers' championship run in 1987, Messier took the cup to his favorite strip club, The Forum Inn in Edmonton, where it was used on stage as a prop (they say sterling silver makes a great tip). A year later, Messier had to take the cup to an auto body shop to fix a dent he put in it while partying with fans. Nice.

The Stanley Cup has been filled with beer many a time, but holy water? That's what Sylvain Lefebvre did when the Avalanche were reigning champions in 1996. Lefebvre baptized his first daughter Alexanne in the trophy, and received a large amount of media attention in the process. That just means she's destined to play, doesn't it? Tomas Holstrom and a few other players have used the cup similarly in the years that followed.

Eddie Olczyk has been known to be just as into horseracing as he is hockey. He played 16 years in the NHL, including a Stanley Cup title with the Rangers, and he also once won half a million dollars on a single race bet. Those two great loves met when Olczyk had his turn with the cup following the '94 season. He took it to the Belmont Stakes where it was used as a feed bag for "Go for Gin," the Kentucky Derby winner. Go for Gin finished second in the Belmont and the Preakness, coming that close to a triple crown.

There's only one Stanley Cup, and you never know when you're going to get it back, so you'd better get a photo with it and make that memory last a lifetime. Red Kelly of the Red Wings got to pose with the cup on eight different occasions, the most championships by a player who never played for the Montreal Canadiens. On one particular occasion, Kelly thought it would be cute to take a photo with his son inside the trophy. And cute it was, until the Kellys found a liquid that wasn't beer left behind in the cup (it also probably wasn't holy water).

Mark Messier wasn't the first to damage the cup by raging his face off. The 1905 champion Ottawa Senators almost lost the Stanley Cup to the same fate. The Senators hosted a banquet to celebrate their title and opened it up to their fans. A few drinks later, fans and players tried to dropkick the trophy into the Rideau Canal. Lucky for everyone, the canal was frozen and the cup was later retrieved.

David Cormier is a blogger for EDCO.com, a leading provider in fine awards and trophies.