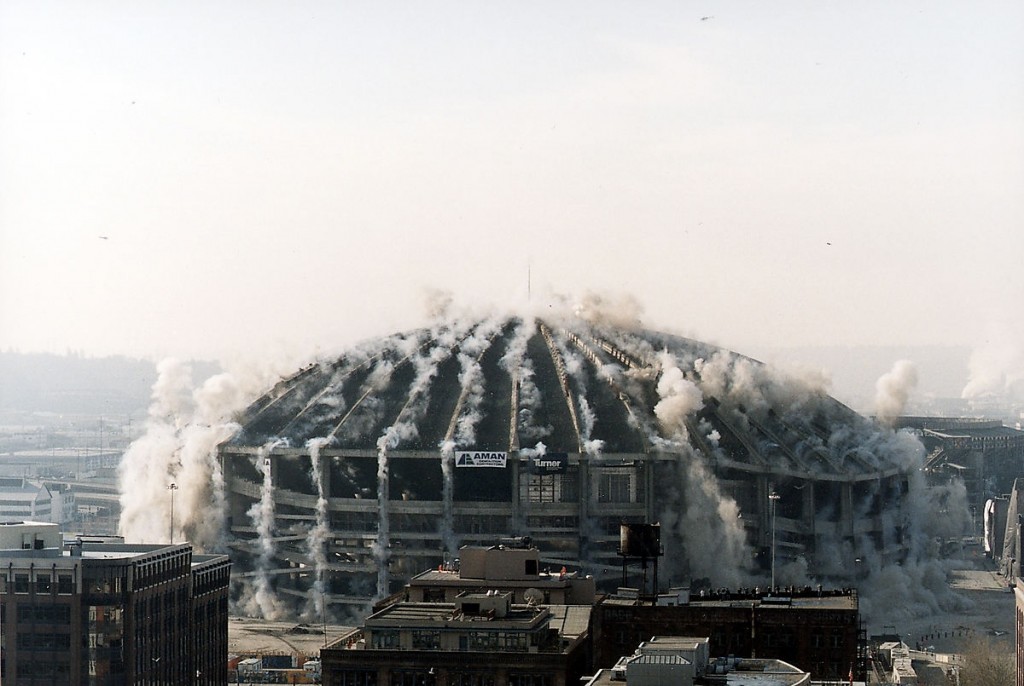 Before we start, let's just get one thing straight - a building can't actually implode, taking the word at its literal Physics meaning. An implosion can only happen when the pressure outside is greater than the pressure inside and obviously with a building that will never be the case, unless enormously complicated steps have been taken to make sure that every tiny crack and fissure has been sealed. The air would then have to be pumped out to reduce the internal pressure and then and only then would the building implode. That's pretty impossible - glass tubes can implode, buildings can't; a building â€˜implosion' is just some very clever detonating to mimic the effect of implosion.

Small is easy - tall, not so much!

It doesn't take well-honed demolition skills to knock down a wall - you can do it with a hammer on your own as long as you take care to tell anyone standing on the other side. Even a building with several stories - in practice up to around five - can be dealt with using a wrecking ball because the walls can be made to fall inwards and the debris can then be removed by excavators. The problems begin with the really tall buildings that sometimes have to come down and of course this problem is far greater if the building is surrounded by others that definitely don't need demolition. For these cases, it is essential to create an â€˜implosion' scenario, and the only way to do this is to use detonation - and very carefully, at that.

It only looks random - it is all under control.

Something always guaranteed to draw a crowd - but at a safe distance - is the demolition of a tall building. Even seen on TV it is still pretty spectacular but many people are fooled by the clouds of dust and the loud noises, usually staggered if only by a few seconds, into thinking that the whole thing is just one big chaotic mess. Nothing could be further from the truth - all of the blasts (and the number will depend on the height and width of the building) are planned to the last detail. How much explosive is used, where the detonation will happen and in which order are all elements of the one event that are carefully calculated to ensure a safe demolition of the structure.

Keeping it all in the footprint.

The space a building takes up on the ground is known as its footprint and the aim of an implosion type detonation is to make sure that almost all of the building (soon to be known as rubble!) stays within that area. The basic premise is simple - remove the support of one floor, and it will collapse onto the floor below. In some cases, this creates a load which is heavy enough to continue the process down floor by floor. The building is not blown up as such. It is dragged down by gravity - the explosions just create the damage that begins the process. After the fall is complete, it is matter of removing the remains. This is not necessarily a small job, of course, but it can be done safely as the whole building is compacted in one area, with no great heights to cope with or delicate walls to be wary of - health and safety issues are always paramount in any demolition task, but an imploded building site is a relatively low-hazard environment, compared with some. Building inspectors will always check for hazardous building materials before a single charge is laid - older buildings in particular must be carefully checked for asbestos and if it is found, this is removed separately using proper equipment.

Toppling a building is easy and if there is room this is always the way builders prefer to do things, being less difficult to achieve and simpler to clean up in many respects as the pile of rubble, though more diffuse, is not as high. Toppling uses gravity in the same way as implosion demolition, except that the explosions only happen on one side. There is still a lot of checking to do - will the whole building fit onto the space available being the most obvious thing to find out - but essentially it is a matter of knocking out one corner so the building falls over. Think felling a tree and you've got the general idea. With implosion techniques this happens in areas of the building that will ensure that every section falls inwards onto itself, adding to the momentum of the gravitational pull. Demolition experts use blueprints of the building - originals if possible - as well as visual inspection to find out where to put the charges. 3D computer programs are available so that the outcome can be checked without any bangs at all - this can identify any glitches in the planning before it is too late.

Each building is unique.

Even if two buildings have essentially the same structure, there are usually small differences either built in to the original design or caused by later renovations or repairs that make them different. The demolition experts look at the building as a series of â€˜towers' - these are not real of course, but virtual towers created by the position of supporting walls, staircases and other internal structures. The plan is to put a charge at the base of each virtual tower so they collapse down and, if the fall is not absolutely perpendicular, slightly inwards. This will give a controlled fall, minimising or, in the hands of the truly talented demolition expert, avoiding altogether, collateral damage to other buildings. In general, the charges will be set on the first and second floors allied with others about five floors from the top of the building, but there are no hard and fast rules.

Although buildings have been demolished in this way for quite a while now, nothing can be assumed when you are talking about thousands of tons of falling stone and metal, so the perimeter around the building is always set much wider than it need be - there is no way to undo the damage caused by a falling block of masonry, so avoiding it is the only way forward. Surrounding buildings are normally evacuated as well and traffic is stopped. All personnel leave the site and the detonation is done remotely - think about the advice about not approaching a lit firework and multiply it up millions of times. That's how dangerous a building is just before it implodes. All of the energy stored in the weight of the blocks is released as it falls to the earth and although it makes for stunning television or a once-in-a-lifetime live spectacle, every time it happens it is a minor miracle of Physics.

Published on behalf of Mr. Andrew Murphy. Andrew writes for Lera Blog and Boss Training and loves football and playing the guitar in his band.