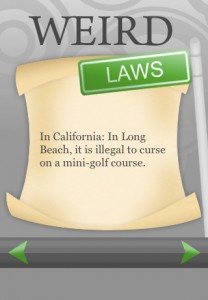 Across the United States, laws are implemented for a variety of reasons, some of which may seem unusual or out-of-the-ordinary. Some of them are passed due to an incident that caused issues in a town, while others are meant to be a temporary correction, yet are never removed from the books. Although it is rare for someone to be arrested for these laws, the potential exists. Below are a few of the wackiest laws provided by Houston personal injury lawyers, Sutliff and Stout.

In Carmel, California, the municipal code makes it illegal to wear shoes with a heel of more than two inches, or a base of less than one square inch unless the person wearing them has obtained a free permit from City Hall. The law was passed in the 1920s in an effort to protect the city from lawsuits when those wearing them tripped over uneven pavement. Police do not site those seen wearing heels in the village, but the law is still on the books in the town.

In the state of Wisconsin, it is illegal to serve margarine to students, patients or inmates in state institutions unless a physician orders the substance due to the health of someone in the institution. In fact, prior to 2011, when legislators repealed the ban, it was illegal for restaurants to serve margarine as well. Although restaurants are now permitted to serve margarine, they may only do so at the request of the customer. In addition, the sale of margarine in stores is restricted to packages of one pound or more, and the package must be labeled as margarine in lettering that is as large as other types of lettering on the label. The lettering must also be in a contrasting color to the background, and each part of the wrapping or container must contain the words "oleomargarine" or "margarine" in lettering no smaller than 20-point font. The law was passed in an effort to protect the Wisconsin dairy industry that saw the growing popularity of margarine as a threat.

In New Jersey, a person convicted of driving under the influence is forbidden from getting personalized license plates on their vehicle for at least ten years. In addition, anyone who has had their license suspended for any reason in New Jersey is forbidden from getting a personalized license plate for two years. The law was passed as an enhanced penalty for those convicted of DUI in an effort to further discourage people from drinking and driving.

You Must Be 18 to Play Pinball in South Carolina

According to the 2012 South Carolina Code Title 63 and the South Carolina Children's Code Chapter 19 Â§63-19-2430, it is unlawful for anyone under the age of 18 to play a pinball machine. Although the law is not enforced in the present day, in the past they were considered games of chance, as they dispensed tickets that could be redeemed for cash and prizes. Many states passed laws requiring players to be over the age of 18. Over the years, they became known as games of skill and awards were discontinued. While other states have repealed laws regarding who could play them, South Carolina has not.

Prison Sentence Possible for Theft of an Alligator

According to Lousiana Statute RS 14Â§67.13, the theft of an alligator, or even the skin or body part of the animal, whether dead or alive, may be incarcerated for up to ten years, with or without hard labor. There is also the possibility of a fine for as much as $3,000, or both penalties may be incurred. The law is designed to protect someone from being deprived of the alligator, skin or body part. It is also possible the statutes were implemented to protect alligators, especially those in wildlife habitats or sanctuaries.

Changing in Restrooms in Beach Resort

In Rehoboth Beach, Delaware, it is illegal to change into or out of a bathing suit in bathrooms maintained by the city, according to Â§198-15 of the city code. There are differing views on why this law was implemented, but the most common reason cited is that it reduced the occupancy time of public restrooms that often have long lines during the summer months. A violation of the statute is considered a civil offense in the beach town.

These unusual laws are still on the books in these states and cities throughout the United States, and there are many more like them as well.