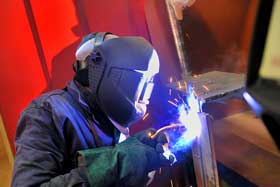 Whilst welding is something we’ve all known existed and many people grew up knowing that it was a process for joining two materials, most of us have thought of it as just ‘being there.’ It was something that we thought always was and always will be but it really wasn’t until the 19th century that Edmund Davy discovered acetylene and Sir Humphry Davy discovered arcs between two electrodes that welding, as we know it today, began as a process.

These two men are credited as the actual fathers of modern day welding. However, even in the past few decades, technology has had an impact on how we weld, what processes we use and even how we inspect the joins. So, this is where you would begin if you wanted to learn about ways in which technology has changed the face of welding. Perhaps you’d really want to begin in the late 1950s through the 1980s as a reference point.

Perhaps one of the most radical changes was the invention of electron beam welding which was first widely employed in the production of the B-70 bombers in the late 1950s. As welding continued to evolve alongside technology, laser welding made its entry into the industry and on today’s fighter jets such as the F22 produced by Lockheed Martin and widely used within the United States Air Force.

This technology makes it possible to accomplish cuts and joins on the fifth-generation Raptor that seats one, has twin engines and is a tactical stealth aircraft fighter designed to be flown in all weather conditions. This is made possible by advances in technology, one being the laser welding technique.

Much of the safety gear you can find on sites like fosterindustrial.co.uk is a totally different creature than you would have found just a few decades ago. Technology has made ‘space age material’ possible and this is lighter weight and more protective than materials of past generations. Not only is the material lighter weight and easier to wear but it is actually not as expensive if you were to compare the cost of living then against now.

Technology and automation make it possible to manufacture safety gear so much faster as well as much higher in protective ratings. The helmets and goggles of the past were overly large, heavy and ungainly making them hard to work in. Today’s protective gear is easier to wear and work in and it has 20 times more protective power than the ones from previous generations.

So what has technology done to change the face of welding? Technology made it possible for new processes to be ‘invented’ so that space age materials could be joined and space age materials could be used in the manufacturing of safety gear. From automated welds, to traditional welds performed by welders, technology plays a large role in how a weld is to be completed and also who or what does the welding. Technology provides advanced materials and processes to make a human’s job safer and easier. That’s how technology has changed the face of welding in a nutshell – safety, materials and processes.