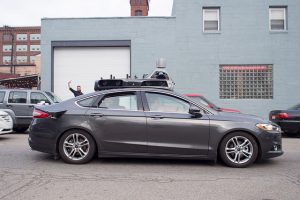 San Francisco, the glittering hub of so much tech activity, will not play host to Uber’s testing of a self driving car. Uber has moved on south to Arizona, and at least for now, is making its investments and partnerships there instead of in California. It came about because of a now-typical story involving Uber’s extreme reluctance to comply with what it perceives to be overly burdensome regulation. Uber has had legal disputes with cities all over the world over its right to operate, and this is a new twist on that familiar line.

Uber has wanted to build its own autonomous car for as long as the other auto-industry players. That includes traditional manufacturers like GM and Ford as well as newcomers like Tesla and even Google. It is a hot field because the first truly autonomous and affordable generation of cars promises to completely revolutionize how we travel, and every company wants to be first. With Uber the process is particularly complex because it has no experience building its own cars and its pursuit of a self driving car would seem to undercut its entire workforce of human drivers, causing some controversy. Nonetheless Uber has begun road testing autonomous vehicles in Pittsburgh and San Francisco.

The problem is that California has special regulations governing self driving cars and road tests. The state requires an extra license and a $150 fee that it collects from each company applying for road tests. So far, about 20 companies have paid their fees and applied for the special licenses. However, Uber refused to do the same. The company argued that its cars were not truly autonomous because there was always a human driver present and ready to take over, and therefore the law did not apply to them. California did not agree with Uber’s interpretation of the law and forced the company to take its autonomous cars off the road. Without missing a beat Uber loaded the cars onto trucks and transported them to Arizona, where the state governor welcomed them and granted them the freedom to be tested without special restrictions. Uber also began collaborating with the University of Phoenix to carry out research related to autonomous vehicles.

It might seem strange at first that Uber would react so strongly to a seemingly light restriction: a flat $150 fee would allow Uber to test all the vehicles it wanted. However, Uber has a history of fighting back against any and all legislation that it deems unfair or overly burdensome. In many cities Uber has come into conflict with the local taxi industry. The taxi lobby attempts to use the law to either place restrictions on how Uber can operate or make it illegal entirely. In many cities Uber has faced temporary or permanent bans on operation.

In general, Uber keeps rolling even when it is outlawed in the hopes that the company and the local government can resolve the situation. For example, in Philadelphia recently Uber had obtained a temporary agreement to operate. The agreement ran out in the fall of 2016 and left the company without a legal basis to operate for about a week, during which time the city and the company negotiated a new agreement. In other cities, including in Europe, the relationship has been less friendly. Uber takes a tough stance in large part because of the threat of setting a legal precedent. Any time city succeeds in banning Uber, it creates a legal example that other cities can follow to also ban the company. If it gives up on too many fights, Uber risks being locked out of operations around the globe.

San Francisco and California may have lost Uber, but there are plenty of other companies keeping their autonomous driving operations in the state. Whether sticking to their guns is the right move for either CA or Uber will depend on how well Uber does in Arizona and how quickly the companies staying in California grow. While Uber is currently exiled to Arizona, it is entirely possible that both Uber and California will benefit in the end if Uber can use its new location to build a strong platform and California can secure a place at the table for autonomous testing. This could also affect California and Arizona car insurance market as local regulators figure out how to treat and insure self driving cars.