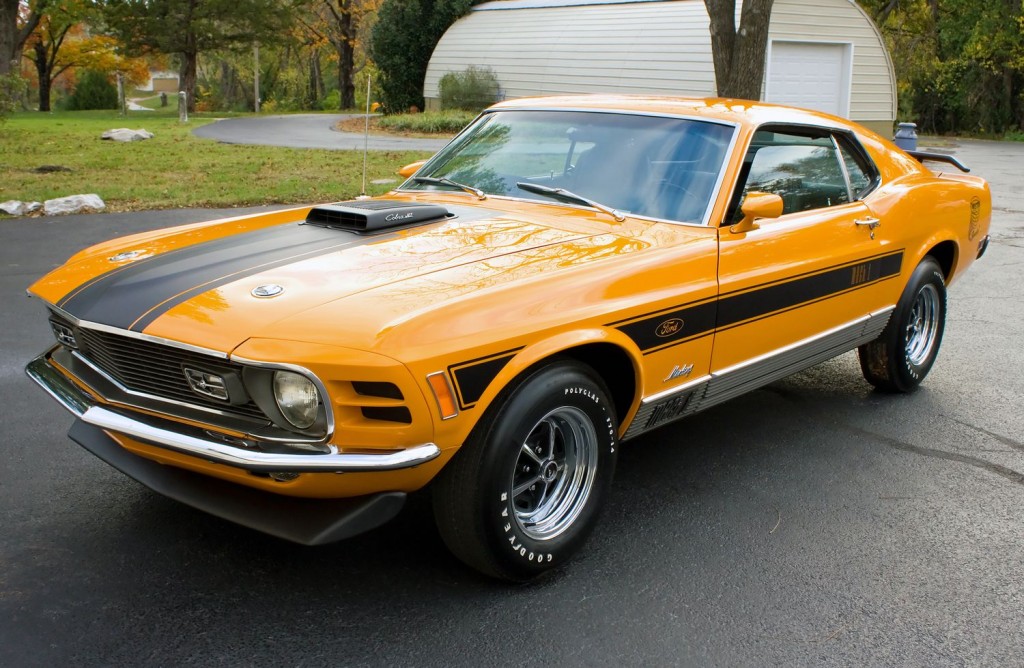 The American muscle car has a cult following, but few cars are as popular or iconic as the Ford Mustang. In 1964, the General Manager, Lee Iacocca, envisioned a small, sleek sports car to out-do the competition; he did one better. In 1964, Ford created an entirely new breed of vehicles which came to be known as the pony car. It came onto the scene with a bang, selling 22,000 vehicles its first day and 1 million in the first two years. Its overwhelming success was made official with its appearance as the pace car during the 1964 Indianapolis 500. Of all the American muscle cars, the pony class is the only one which still exists today.

In the beginning of the 1965 production year, the Ford Mustang had already made a name for itself in the market over the previous 5 months. The original model is often referred to as the 1964 Â½ because it was released early.

The original design was modeled on the European compact Falcon to make a smaller car and cut cost production. Like many cars in the European tradition, it began as a two-seater but was powered by a massive 170 CID six-cylinder with a matching pair of V8s. It was especially popular with consumers who loved the low price tag, elongated hood, and short trunk.

Over the following years, the Ford Mustang has developed in both style and power, maintaining and improving these elements. The Ford Mustang is currently in its 5th generation and is still more popular than ever.

The second generation ran from 1974-78 and was designed as a smaller, more fuel efficient model. It was introduced to the market just before the oil crisis in 1973 which allowed it to be highly competitive against imported sports coupes like those from Toyota. They had record sales of over four-hundred-thousand vehicles.

In 1979, the interior of the Mustang was redesigned to accommodate four people in comfort even though there was a smaller rear seat. It was produced with two main body styles, the "4 eyes," and the "Aero." This generation was the longest running for a record 14 years from 1979 until 1993 but was redesigned in the 80's because of the lower sales and the rising fuel prices.

In the fall of 1993, the Mustang got a complete redesign for the first time in about 15 years. They finally got rid of the Hatchback Coupe which had been in production since 1974. The body was completely revamped to have Ford's New Edge style. The whole idea was to combine arcs and creases to make it more aerodynamic and also reduce production time. The lines and combination of the curves, straight lines, and planes made the new Mustang unique and unmistakable on the road. While the body changed, the interior proportions, basic interior layout remained relatively unchanged. The engine was improved to give it more power and efficiency. This generation was proud to present four different models including a convertible.

The Ford Mustang was redesigned once more in 2005 and the initial Mustangs of this generation were designed to be reminiscent of the fastback models on the late 60's. Once again, the engines were improved, and the bodies were made stronger and more identifiable. The Mustang has several different iterations in this generation, all of which are powerful muscle cars and beasts on the road.

Ford Mustangs are available all over the country and are definitely a prize for any collection or for use on a daily basis. They were built to last and are hardy vehicles with tons of power and beauty. The Mustang, while it has undergone many changes, remains true to its namesake. It is a majestic creature with loads of power that will set you apart from a crowd. These muscle cars are stylish, powerful and definitely a great buy.

Written by the marketing team at Discount Ford Auto Parts-discountfordautoparts.com.