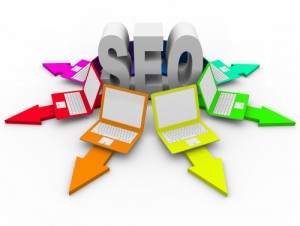 The Internet is basically a mirror of human psychology. Humans are social beings, so it's really a manifestation of group psychology. The better you can understand your target group and "what matters" to them, the more successful your Lazy Man SEO efforts will be. Just keep in mind that "what matters" is dynamic and always shifting and you need to stay on top of it.

1) Build it bigger and better.
2) Make it more useful than anything that's out there.
3) Pull a bunch of data points together to support a popular idea.
4) Take a common idea or theme within a community, and make it visual (infographics).
5) Show that you understand the community by caring about their nuances.
6) Do rankings or awards that are defensible (people need to care about them).

Let's run through an example and say that your target group is The Tea Party. It doesn't matter if you agree with The Tea Party ideology. You're a marketer after all. You give people what they want, not what you want. So what's going to matter to people who follow The Tea Party?

Well, there are a number of angles you could take. My preference would be to develop some sort of flatter bait that deeply appeals to the sensibilities of Tea Partiers. Here are some ideas:

Now, let's say that someone had already written a comprehensive "Tea Party Manifesto" and it had gotten fairly wide distribution. Chances are that you should ditch that idea, because once it's been done well, it probably won't matter as much to people the second time around, unless you can drastically out-perform the first instance.

But no worries. We'd just work with the other items on the list. The important thing here is to contrast these content ideas I've presented, which admittedly will take some research and hard work to develop on the content side, with the tendency of many bloggers to write thin content that matters to absolutely no one but themselves and their mamma.

This is ultimately how you break into an ultra-competitive niche. Become the site that consistently matters.

How Large is the Target Group's Online Presence?

With online marketing, you always have to balance between audience size and saturation. The larger the audience, the higher the chance that your ideas will not be unique, and that someone's already done them. You could always do it better, but it's an uphill battle.

At the same time, you don't want to be targeting a group that's too small to make a difference. That's like developing a line of t-shirts that's only relevant to people who actually live in Antarctica.

My preference is to target audiences that are large, passionate, vocal but relatively untouched by other online marketers. Going back to my Tea Party example, I'm willing to bet that they are a relatively untouched niche. Why? Because most Internet Marketers don't agree with or understand the Tea Partier psychology and haven't attempted to reverse engineer it.

But the group is big enough (lots of tea party blogs and forums) and passionate enough and has enough online representation that you can get some pretty damn good links. And the people involved aren't super jaded towards online marketersâ€¦ at least not yet.

How Important is Your Target Group?

By important, I just mean, how much online authority do they have and how integrated are they into the wider web. There are some relatively large fringe groups out there, and the fascinating thing is that they are so fringe that even their top sites don't have much link "ooooomph" because they're secluded from the wider web. So it's important to ask: do they have a natural hierarchy with a few powerful, well-connected, well-referenced websites at the top, which set the group's conversational agenda plus a wide but vocal group of second tier sites that join the conversation? That's what you want to look for: a group that has lots of sites which source directly from a few powerful ones. Which leads me to the next point:

Identify the "Key Leaders" in That Group

As a marketer, I like to think of the web in terms of distribution points. Take the old snowball rolling down a mountain metaphor. The higher up you start your snowball, the bigger it is by the time it gets to the bottom of the mountain. On the Internet, the top of the mountain is represented by the "key leaders" - and these are the big influencers. If you can get their attention with your content, then you can let gravity do the rest. And that's why this is the Lazy Man's SEO.

You build great content that matters. And then you feed the content to a few "key leaders" in the right group. And then you wake up the next morning with a whole slew of natural, organic links.

Well-earned too. You're making the web a better place.

lokesh is author at LeraBlog. The author's views are entirely their own and may not reflect the views and opinions of LeraBlog staff.