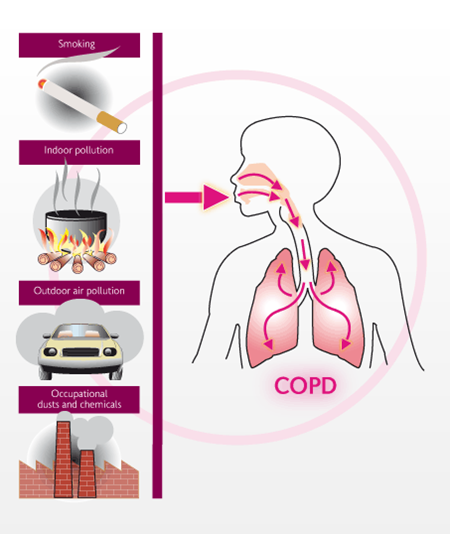 Chronic obstructive pulmonary disease (COPD) is the fourth biggest killer in the United States. 12 million people in the U.S. alone have been diagnosed with COPD and one person with COPD dies every four minutes. Worse still, millions of people have COPD and are unaware of how much danger they are in.

COPD is a serious disease.

"Known also as emphysema or chronic bronchitis, COPD is a preventable disease of the lungs caused by exposure to tobacco smoke as well as dust and airborne chemicals," says Bengt Rittri, founder and CEO of Blueair, a Swedish company that sells life-transforming indoor air purifiers in 64 countries globally.

The main cause of COPD is cigarette smoking. You don't have to be a smoker to have COPD - even non-smokers can develop the symptoms as a result of passive smoking. COPD is also caused by air pollution, and as MrRittri reminds us:

"Humans on average take around 960 breaths an hour, which means we breathe in something like 10,000 liters of air - and all the nasty stuff in it - each day."

COPD is a global problem and the general public needs to be more aware of just how serious it is. Unlike common respiratory illnesses, such as the common cold, COPD does not get better. To begin with the symptoms are fairly mild and innocuous, but over time, the patient becomes increasingly ill, with a reduction in the quality of their life.

Once a patient has COPD, their life expectancy is shortened. COPD is a progressive disease, so as time goes on the symptoms worsen and the person gets sicker. In the early stages of the disease a person will have 80% of their lung function intact. By state 3, they will have severe emphysema, with only 30-50% of lung function remaining. By stage 4, the disease is terminal and lung function has deteriorated even further; blood oxygen levels are very low, too.

How Can COPD Be Prevented?

The best way to prevent COPD is not to smoke cigarettes, or if you do smoke, quit as soon as possible. You should also avoid exposure to lung irritants such as diesel and petrol fumes, air pollution and dust, and of course second-hand smoke from other people's cigarettes.

Unfortunately, avoiding pollution is not that easy, but as Mr. Rittri quite rightly points out, you can manage the environment in your own home and take appropriate steps to purify the air you breathe:

"There is not much we can do as individuals about the air pollution in our cities. But we can take simple steps to alleviate the potential consequences of indoor airborne pollution such as COPD by simply installing an air purifier, like those made by Blueair, which can capture up to 99.97% of airborne particles such as smoke, dust, chemicals and fumes."

Once you have been diagnosed with COPD, make sure you follow your treatment plan carefully, as this will help you avoid any health complications and ensure you stay well for longer.