Dihydrotestosterone (DHT) is a powerful androgen hormone derived from testosterone, the male sex hormone. It is important for the development of the secondary sex characteristics that distinguish men from women. Unfortunately, it is also an enemy of scalp hair follicles.

Too much DHT in the scalp destroys the follicles, causing many kinds of hair loss. It is the main culprit of androgenetic alopecia, a condition that is also known as male pattern baldness. While this type of hair loss can occur in women, it is mostly a male condition. It accounts for two-thirds of all hair loss in men.

Science has made great strides in the treatment of male pattern baldness. From medicine that contains 5-alpha-reductase inhibitors to surgeries that transplant hair or reduce the scalp, medical treatments can slow hair loss and encourage new growth. 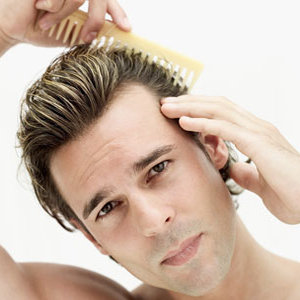 The market is flooded with hair loss treatments in the form of shampoos, topical creams and lotions, herbal supplements, wigs and more. Unfortunately, many of these products are "snake oils" of questionable value. Those that are not approved by the Food and Drug Administration (FDA) or recommended by the American Hair Loss Association are often a waste of time and money.

Two treatments are clinically proven to correct male pattern baldness, and both of them have FDA approval. Finasteride and minoxidil are effective treatments to varying degrees. While herbal remedies are not regulated by the FDA, some of them are also successful for treating hair loss.

Finasteride is a generic name for two popular pharmaceutical brands. Originally developed for prostate treatment, finasteride was shown to produce an interesting side effect: hair growth. Today, this oral prescription drug is the most effective treatment for male pattern baldness.

Finasteride works by inhibiting the 5-alpha-reductase enzyme that converts testosterone into DHT. If taken daily, one dose can lower DHT levels by up to 60 percent. Studies have shown it to stop hair loss in nearly 90 percent of men using the drug.

Minoxidil was the first FDA-approved hair loss treatment. It was originally used for high blood pressure, and it also produced a hair growth side effect. This over-the-counter topical solution has been successful for growing new hair in bald spots.

While minoxidil can grow hair and slow the progression of baldness, it cannot stop hair loss. Unlike finasteride, however, it has few negative side effects. Minoxidil may cause skin irritations at the application sites. Scientists link finasteride to sexual side effects like premature ejaculation and erectile dysfunction (ED).

Aloe vera, ginkgo biloba, ginseng, green tea and saw palmetto are five popular herbal hair loss remedies. These herbs have been shown to stimulate new hair growth. Many of them also contain DHT blockers that prevent testosterone conversion. Used alone or with medication, herbal treatments can mitigate the extent of baldness and slow its progression.