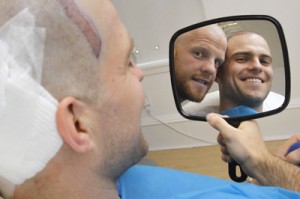 Have you ever wondered how we evolved from powdered white wigs of our ancestors down to the hair follicle transplant surgery available today? The answer is not that our ancestors had less hair than we do (they didn't) or that it has become less fashionable to want to cure balding, but simply that we've gotten more resourceful. Here's a quick look at a timeline that brought us to our modern-day procedures.

As far back as ancient Egypt, wigs were used not to cover baldness, but as a symbol of status for men. High, powdered wigs were used to display wealth and nobility much like cars or clothing labels are used today. This practice was largely abandoned during the twentieth century, following our fifth president, James Monroe. Now, they are more popular among women following the loss of hair, such as with chemotherapy. They are also popular for costumes and special occasions, as demonstrated by celebrities such as Nicki Minaj and Tina Turner.

Although it may be a fun story, the toupee did not arise from some wig mishap: it arose from a desire to seem naturally gifted with a full head of hair. Unlike the wig, the toupee is harder to trace back through history, although one was found in a tomb in Egypt around 3100 B.C. Julius Caesar is also rumored to have had a toupee, which he swapped regularly with his wreath to disguise his receding hairline. When the wig began to decline, toupees picked up in popularity: by 1959, Time Magazine reported over $15 million in U.S. sales alone.

Max Factor, a Jewish cosmetician, redesigned the toupee in the 1950s to be more realistic and functional. Factor's toupees quickly became the standard for quality, and boomed in Hollywood's market. Although currently, the toupee is in an overall decline: but why?

While this is hardly a hairpiece, it's designed to disguise baldness all the same. It certainly isn't new, with the Emperor Constantine known for his forward comb-over in 306 A.D. The hairstyle is versatile, allowing for a variety of comb-overs: the hair you have is grown longer, and then combed over the balding area. The style was actually patented in by Donald Smith and his father Frank Smith of Florida, for which they won an Ig Nobel Prize in 2004.

A hairstyle that could win awards? That's right: America was that eager to restore full heads of hair, they were rewarding efforts made to disguise or cure baldness. Naturally, there was only one place left to go.

Hair graft transplant actually dates back to the 19th century, although modern techniques weren't present until the 1930s in Japan. In the late 1950s, around the same time as the new toupee redesign, a New York dermatologist experimented with donor grafts in balding areas. This experiment proved that the donated grafts would survive in the balding area, which led to an explosion of experiments and discovery.

Walter Unger was the next surgeon to try his hand: he defined the "Safe Donor Zone" parameters, which dictated which hair grafts could be donated and grafted, and is still used today. For the next twenty years, surgeons focused on how to place the donated grafts for maximum success. Dr. William Rassman in the 1980s worked to use thousands of micrografts in a single session, as opposed to having patients endure multiple visits. Over time, technology has allowed surgeons to make smaller incisions, as well as developing the "lateral slant" technique, which manipulates the angle the graft is placed in.

Currently, hair transplants can be performed with minimal pain and an immediate recovery time. With advancements like that in such a short period of time, it makes you wonder what's next.