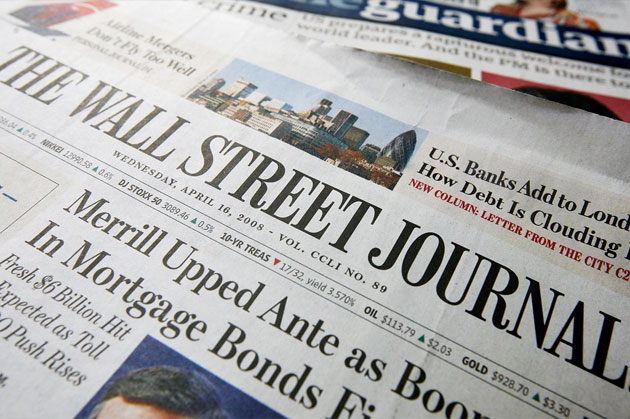 The Wall Street Journal is the best-selling newspaper in the United States as well as being one of the leading economic and financial publications globally. With circulation figures of 2.3 million readers daily, it has grown year on year since the first edition was published in 1889 (Source: Wikipedia).

Owned by the Dow Jones Company, the Wall Street Journal has adapted to the demands of modern technology with almost a third of their readers now accessing content online via the WSJ website or their iPad and Android apps. What follows is a history of the WSJ and Dow Jones Company from the first beginnings up to the present day.

Clarence Barron buys the Dow Jones Company and Wall Street Journal in 1902 and proceeds to lay the foundations for the excellent reputation the paper grows to attain. He employs high-grade journalists and launches the paper a proper daily in 1934. During this period he was extremely innovative with some new developments which are even used today in publications such as specific financial columns relating to economic niches, and even a real-time news ticker which was displayed on a car in Wall Street.

In 1941, Barney Kilgore became the new MD of the WSJ and pushed the paper forward towards its more present-day format. 1947 saw the newspaper win the first of many Pullitzer Prizes for journalism and from 1950 to 1953, the WSJ started to print regional editions throughout the United States.

In 1962, the Wall Street Journal embraced technological changes as the Dow Jones Company was now able to produce the editions by using facsimile - meaning it was becoming truly national. The circulation hit the magical one million readers by 1966 making it a milestone for any American newspaper at that time.

The Dow Jones newswires began to expand outside of the United States by placing journalists in the major continents meaning they were able to report quicker global news developments. 1971 saw the Wall Street Journal partner with Bunker Ramo to store content digitally. This would mean when the Internet came along the paper would be able to rapidly deploy content that was already decades old.

Between 1976 and 1983, the Wall Street Journal had European and Asian editions launched, meaning the newspaper was now firmly established as a global entity rather than simply North American. By 1995, the WSJ was online, becoming one of the first newspapers to go digital.

In 1997 the Dow Jones Industrial Average became licensed meaning a new business arm was launched - Dow Jones Indexes. Moving forward to 2005, a Weekend Edition of the Journal was launched catering to a larger demographic with sports, media, and cultural content. 2007 saw the biggest take-over in publishing history as the News Corp Company bought out Dow Jones meaning the paper would be able to extend its reach even further.

With the powerful News Corp now behind the Dow Jones Company and WSJ, it was now possible to further increase subscriptions and circulation. New language versions launched in Arabic, Dutch, German, Japanese, and Spanish. Tablet versions of the Wall Street Journal were also launched, helping the WSJ to achieve record numbers of subscriptions.

In 2011, the paper started to offer reduced subscription rates for introduction periods, something that had not been seen before with newspapers this large. This was in order to mitigate any potential readership losses due to the Internet. Many niche websites popped up offering links to Wall Street Journal discounted subscriptions (Click here to see an example of a Wall Street Journal discount subscription website)-this initiative helped to further increase the circulation levels to what they are today.

The last few years has been a tough time for many traditional print-based newspapers, with some even large titles disappearing due to the changing habits of newspaper readers. In fact, since 2008 nearly 170 US-based papers alone has ceased to trade (Source: The Guardian). However, the future of the Wall Street Journal looks to healthy, which is testament to the developments put in place during its long-established history.