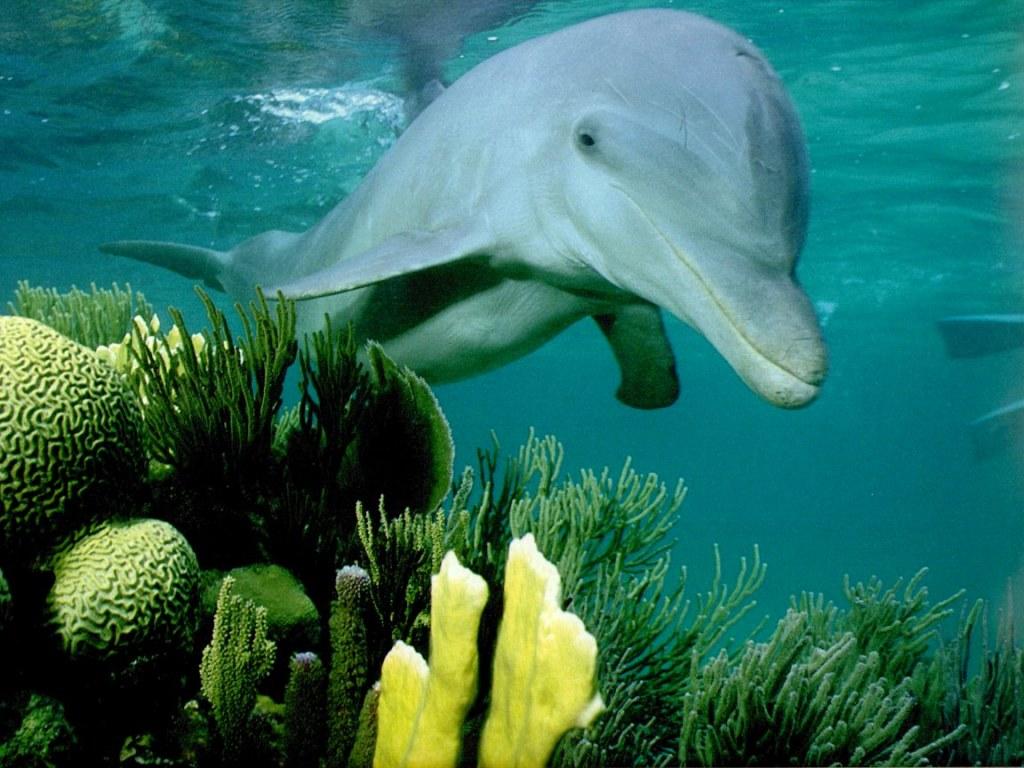 There are computers rugged enough to immerse in water for a special purposeâ€”to bridge the gap between the sophisticated language of dolphins and that of humans. These touchscreen computers are part of a language interface between two of the most intelligent types of mammals in the world. A variety of software programs are introduced to the dolphins in an organized sequence. One program focuses on the concept of â€˜same/different'. A dolphin could be shown a 3 dimensional object, such as a beach ball, and then instructed to identify its corresponding, 2-D version on the touchscreen computer.

Once dolphins have mastered the connection between real-life objects and their touchscreen counterparts, more advanced software games are introduced where symbols are displayed on the computer that equate to actions, such as": â€˜leap through the water'. Natural dolphin â€˜words' (sounds) are attached to each computerized symbol, and these are labeled simply as â€˜sound/picture words'. So, in essence, through â€˜educational' software, so to speak, dolphins are actually learning to read. Symbols mean something tangibleâ€”much like a first grader who sees and reads the symbols â€˜c-a-t' and associates those symbols with a word that represents a purring family pet.

Through fascinating research revealing equally astounding revelations, scientists have discovered that dolphins all possess a universal language labeled as â€˜sono-visual'. That is, dolphins have visual aspects mentally attached to their audio languageâ€”they see with sound much like humans, for example, who can say the word â€˜lion' and visualize the beast in their mind's eye.

An echolocation software program was developed called â€˜biocymatic imaging' to directly analyze and connect dolphins' echolocation sounds with objects not found in nature such as rubber ducks, flowerpots and beach balls. When a variety of these computer-displayed items were shown to dolphin subjects, individual sounds were emitted for each individual picture. In other words, each picture received its own audio. When the sounds were replayed in the company of those same dolphins, they were able to identify and pinpoint the objects (both computerized and 3-D) based on the accompanying echo-sounds that were played, with almost 100% accuracy.

This type of software takes dolphin-talk to a whole new level. It should be noted that â€˜cymatics' is a recognized field of science that is becoming far-reaching. Surprisingly, scientists have been experimenting with making sounds visible for centuries, but it has been only recently, due to the saturation of nano-technology and advanced software applications, that cymatics is becoming a reality in a variety of fields, with ocean-biology being one of them.

Cymascope Imaging is very similar to ultrasound imaging in hospitals. Sono-visuals, from dolphins, actually manifest themselves in the water as the dolphin â€˜speaks'. The cymascope captures the â€˜picture' of what the dolphins are saying before the sono-visual disperses throughout the water, never to be â€˜seen', a gainâ€”in other words, the cymascope can actually capture the outlined images the dolphin's sounds create. When the dolphin sees a flowerpot and â€˜says' flowerpot with clicks or squeaks, those clicks and squeaks form the outline of that flowerpot on the computer screenâ€”believe it or not!

Jack Kassewitz, a scientist with a Miami, Florida-based dolphin research institute sums it up very nicely: "SETI's search for non-human intelligence in outer space has been found right here on earth in the graceful form of dolphins."

Whether it is SETI's research or a company like Zephy Corp contributing to terminal emulation software, none of the astonishing, absolutely fantastic technological advances that we have come to know, today, would ever be possible without them and do many others.

Thanks to the decades Karen spent educating in the Tree Planters' State, she is able to put our rich, informative content through her writing. Her studies are so diverse, that she could be covering DJs and terminal emulation software windows in the same day.