Since cyberculture is a fairly new phenomenon, it is hard to define as one rigid category. In its broadest sense, cyberculture refers to the culture inherent in any online community, such as forums, chat websites, online gaming, shopping etc. One of the most controversial and widely discussed topics is the effect that the cyberculture of any given platform can have on the way someone views themselves and others when given the power of anonymity, or lack thereof, on the web. 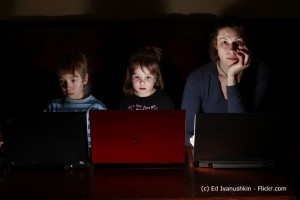 Breaking the Chains of Identities?

Various studies have shown that the expansion of cyberculture, and the resulting change in the nature of our identities, will have a massive impact on the way we define communities and social interaction in future. Other investigations have found that with the rising popularity of social media, people (particularly in the younger demographic) seem to define themselves less on the basis of religion, job, heritage, national identity etc. and more on their online presence. This concept, it seems, is very often misunderstood. Instead of forging alternate or superficial identities as many critics suggest, the re-defining of identity has helped people escape from their pre-conceptions about who they are and become more in touch with their “true” identities. One particular study showed a trend in disabled people who said that the outlet of online role-playing games let them interact on equal ground with others.

By the same token, these and more findings seem to point towards a gradual corrosion of traditional social identity. Some have drawn predictions from such investigations that the line between work and social identities will become more and more blurred with time, with photos and personal details becoming more and more accessible through social networking sites. Consider a hypothetical (but let’s face it highly probable) situation where a young promising graduate is denied an important promotion after their employer sees drunk photos on their Facebook page. Also, as the lines defining online and real-world social identities deteriorate, criminals are likely to take advantage of the many examples of interlinked data, Twitter and Linkedin for example, to steal people’s identities.

The End of Anonymity?

The problem with the corrosion of real-world identity is nothing new, and there seems to be an emerging response to all the criticism in the way that an emphasis on authenticity is gradually creeping into the realms of social media. For most people, applications and products that fall under the Google and Facebook umbrellas are the full extent of their online identity. Although both companies have been online giants for some time, many attribute the popularity of their networks to the value of knowing that someone is who they say they are. Within these models, identity is non-anonymous. Google+ and Facebook profiles are tied to a person’s real name and connections, and more and more to their activities elsewhere on the web. The higher-ups at Facebook particularly seem to think that authenticity is linked to a user’s photostream, which is probably why they bought Instagram for $1 billion in 2012.

On the other hand, online shop retailer and businessmen have already found out the possibilities of the new cyberworld. It is easier than ever to manipulate, and construct the desires of individual. A pillar of their success is the fact, that whatever anybody wants to order in the internet, the buyer remains unseen: Anonymity remains. Everyone receives things by mail; there is no shop tender, no staff watching while a customer checks the shelves full of unusual products. There is no need to look ashamed while entering or leaving shops in the city, always afraid of being watched by someone who could recognize him. Additionally, online shops want to make online shopping more and more comfortable as possible. Amazon announced to develop drones and Google wants to implement a buy-button.

It is particularly this anonymity that makes cybercultre so flexible. It is very likely, that in future every individual will have three identities: The real life identity, the google / facebook identity, and the identity of the online shopper, the last one being changeable constantly.

TomJay is author at LeraBlog. The author's views are entirely their own and may not reflect the views and opinions of LeraBlog staff.