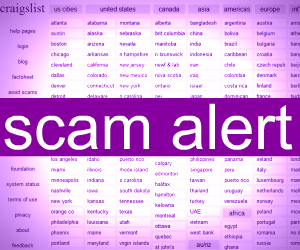 You know what Craigslist is, right? If the answer is no, then surely you've been living under a rock since 1995 when the site first graced us with its presence. We use the term "graced" because, in lieu of its track record, Craigslist is pretty awesome. The online marketplace makes it super easy for us to buy and sell anything (seriously, anything), adopt pets, find jobs, attempt to locate that hottie who said "hi" to you at your local coffee shop, and much, much more. Unfortunately, anything this great is bound to have its downfalls, and Craigslist is no exception.

When we said you could find anything on Craigslist, we really meant anything, including what all web users hope to avoidâ€”scams. Yup, our beloved virtual flea market is also near and dear to online crooks whose only goal is to rip you off and then disappear off the face of the earth. Everyone should enjoy Craigslist and use the site to its full extent, but that's impossible if you're plagued with paranoia about getting scammed. Don't worry, we're here to help you out. Below is a list of the three most common scams you'll encounter on Craigslist. Keep these in mind, and you'll be able to spot the red flags from a mile away! Remember, if you're ever unsure about an online buyer or seller, use can always run an online background on the person to find out if they have a rap sheet. Click here to learn more about these services.

When concerts sell out, there are countless fans who procrastinated on buying tickets only to find out that now it's too lateâ€”or is it? Luckily, you can bank on the fact that some people bought tickets but won't be able to attend, and it's only a matter of time before they turn to Craigslist to sell their tix. Unfortunately, scammers are also well-aware of the high demand of sold out concert tickets, so they too will turn to Craigslistâ€” except they're selling tickets that don't exist.

Fake tickets, canceled tickets, and duplicate tickets are probably the most common scams, but more and more people have caught on, so the crooks are getting more advanced in their sketchy methods. Scammers often say they can't meet in person because they're "out of town," or some other bogus excuse. They'll ask you to pay via wire transfer or paypal, which is obviously a major red flag.

The jobs section on Craigslist is one of, if not the most visited parts of the site, and scammers like to take advantage of innocent job seekers. The most common job scams are those that list an open position with a link to apply. When you click the link, you're redirected to a page that looks like a real application, except it's just a ploy scammers use in order to get all of your personal information such as name, address, contact info, and sometime even your social security number. So, if you're in the market for a new job, be extra careful when you browse open positions on Craigslist.

In rental scams, a crook poses as the landlord of an apartment building. They list "open units" on Craigslist using random photos, which are often obtained from stock photo sites. Then, they advertise a super low price for rent, which will obviously attract lots of potential renters who think they've scored an awesome deal. So awesome, in fact, that they're willing to pay a deposit without even seeing the property or meeting the "landlord," simply because they don't want anyone else to snag the deal. That's exactly how rental scammers operate, and you'd be surprised how many people are willing to shell out money for a place that doesn't even exist.

So, now that you know the three most common types of Craigslist scams, you can rest easy knowing that you'll be able to spot one right away. If you do encounter a scammer on Craigslist, or even a suspicious listing, you should flag the post, and report the incident to abuse@craigslist.org.

Justin Worthington is a blogger from San Antonio, TX. He specializes in writing about online safety and security.