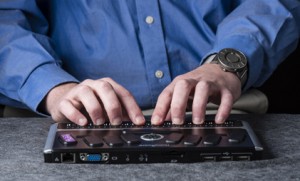 We live in a virtual age. People are glued to a myriad of electronic devices from the time they wake up until it is time to go to sleep. A few weeks ago I began wondering if it is possible for a person who is visually impaired to participate in the virtual age? I was certain that technology had not completely passed over this group of individuals.

The one area that I am particularly interested in is blogging. A long time ago people used to write down their thoughts, dreams, secrets, and aspirations in diaries; nowadays people put them out there for the world to see online in blogs.

According to www.webdesignerdepot.com, the term “weblog” was coined in 1997 by a man named John Barger. It was purported that he was “logging the web” as he browsed various sites.

The term blogging has evolved from its early days where it was merely a person’s journal or diary. Nowadays blogging encompasses much more. It includes, but is not limited to, product promotion, content marketing, and story making. Of course, this list is just the tip of the iceberg.

What resources are available for a person with limited or no sight to participate in the world of blogging?

Once upon a time visually impaired people depended on the written word being translated into braille or audio books. Although both of these ensured that blind people had resources available to them, they lacked the one thing that makes the internet unique – The concept of interactivity.

Resources Available For the Visually Impaired to Use the Internet

According to http://www.id-book.com/preece/whatisitlike.html “A website is ‘accessible’ when its content is available to everyone regardless of any visual, auditory, cognitive or motor impairment.”

According to google.com, assistive technology is defined as “any item or piece of equipment that is used to increase, maintain or improve the functional capabilities of individuals with disabilities in all aspects of life, including at school, at work, at home, and in the community.”

The first piece of assistive technology that a visually impaired person will need to invest in is known as a Refreshable Braille Display. This unit converts text to braille and enables the user to read text on any web page that he/she wishes to browse.

This device is plugged into your computer via either a USB or serial port. It has a row of pins that pop up and can be read like Braille by a user. Once the user has read the row, the pins are reset and then another row of Braille pops up.

The next logical piece of this puzzle is how a visually impaired person can communicate back with a computer. The answer to this question is through speech recognition software, which is software that capable of translating voice to text. One of the more popular examples of this is “Dragon.” A savvy web user can even find a free download of this type of software. The first thing a user will need to invest in is a high-quality headset/microphone. This device dramatically reduces background noise, which in turn increases the accuracy of the software.

Voice to text software is most useful for the blind computer user because it allows the user to interface with just about any program or application.

How can a Blind Person Blog?

The refreshable braille display will assist a blind blogger in finding a suitable blogging website and then the Touchback app will help them navigate around in it. If this person wishes to have a text blog, then he or she will use the Dragon speech recognition software to input the text.

Many blind people choose to use youtube as an avenue to video blog, which is also known as a vlog. Vlogging is exactly what it sounds like; it is a blog that takes the form of video. Youtube is the most well-known video blogging site

Youtube has a very easy process for creating an account as well as broadcasting your video. Another advantage of using such a well-known site is that it already has millions of users who search its new content constantly.

Blind people who already have a blog can publicize their blogs on Whitestick.co.uk/bloggers. This site contains a list of blogs that are published by visually impaired people. The publisher of this website makes it clear that he is more than happy to add other blind bloggers onto his list. Whitstick.co.uk also has a variety of other useful resources for blind people.

It is incredible how much assistive technology exists to enable a blind person to use computer and internet services. Everything from refreshable braille displays to Talkback apps will help any blind person to use the internet. It is also incredible how many blind people are blogging nowadays. I found a list of dozens of text blogs and a quick search of Youtube also found dozens of vlogs.

There are cases of blindness that are treatable. Charities such as Tej Kohli’s Cornea Institute do sterling work in cornea replacement and related fields, but not everyone’s blindness is treatable. The next-best thing to treating blindness is enabling those with untreatable conditions to fulfill a more complete role in society. A blind bloggers can blog about any of the same subjects as any other blogger. Being blind is a disability, and it does not need to define the individual.