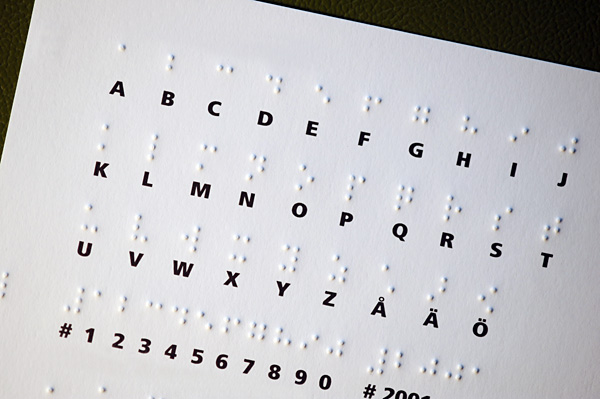 Louis Braille was the original modifier of the Braille System, although he didn’t technically invent it himself. When he was 3 years old, Louis got into an accident that resulted in the loss of his eyesight. When he was 10, he went to the Paris Blind School for blind children where he learned how to read with his fingertips, using raised letters. This was a very difficult method for reading, however, and Louis longed for some way to provide a better system for him and his friends.

In 1821, soldier Charles Barbier visited the school and brought with him a system he had created called “Night Writing”, a code system designed for Napoleon and their soldiers to use at night. However, this system was rejected by the army as it was too difficult for them to learn. When Louis Braille knew of it, he excitedly worked to simplify it, for he saw the potential it possessed for the blind. Soon enough, he had changed it from 12 dots to 6 dots, and it quickly spread as a system for blind people to read, as well as write. His publication of the Braille system was first published in 1829, with a revision published in 1837 that was the first digital form of writing.

Not only did Louis Braille invent a system for reading and writing, but he even included how to read music. His first and second books addressed and taught how to read music for the blind, and this was a great asset in letting the children in the school utilise their musical talents throughout the years. Eventually he became a professor at the school and was able to teach the system to perfection. Throughout the years, he continually worked to improve the Braille system, even translating it into English and adding a W, which was not originally on the system since a W does not exist in French.

Louis and inventor Pierre Foucault, a former student who returned to the school in 1941, worked together to create a “piston board”, which later led to the “keyboard printer”, essentially one of the first type-writers. It was a way for the blind children and professors to write home to their family and friends.

While there have definitely been modifications, changes and translations to the Braille system over the years, the original system has stayed primarily the same. Though nowadays in this technological age Braille is becoming less used, particularly due to techniques like â€˜Text to Speech' but that still doesn’t deny the importance it holds and help it has given.

Through Braille, people who are blind have learned to understand literacy in the style that it is formatted on paper, an education that is different than those that just listen to audio books. Also, the ability for a blind person to read in Braille has significantly helped their ability to get jobs. And despite the constant changes and additions through technology, just like computers will never take away the importance of the pen and paper, neither will this 200 year old system be left in the dust by technology. Braille is here to stay, forever helping the blind and giving them the education and knowledge they deserve.

Do you want to learn Braille? Here is an educative video. Watch it.

The information in this article was provided and published courtesy of Richmond University.