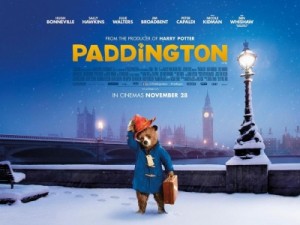 Adults and children have been over-awed by the Paddington Bear that has captured their minds first in the form of a book narrating its classic tales and selling more than 35 million copies across the globe and then with the release of the Paddington movie at the end of 2014 that was a big hit. A Paddington Trail was created consisting of about 50 locations which were part of the shooting locales and venues where 50 small statues of the bear were decorated by celebrities and artists. You can take a one-day tour that will take you round the top locations referred to in the book and in the movie.

The tour starts in the morning and covers the areas of Paddington and Little Venice or Oxford Street and Leicester Square. The starting point has aptly been chosen to be London Paddington railway station which is the place where the Paddington Bear first made its appearance having been brought from the darkest part of Peru. There is a bronze statue of the bear in platform one under the clock which is an ideal place to get clicked with the â€˜celebrity' bear and is also close to the place where it was discovered first by the kindly Brown family. At the station, you can also find the Paddington Bear Shop which has the distinction of being the only store in the world completely dedicated to the bear. At this shop you can find plenty of models and stuffed toys along with key rings, mugs, books and other related items.

The tour will then take you to the Paddington Basin where you can see a statue of Michael Bond, the Paddington author along with the Paddington Bear. Commissioned in 2013, the statue was a part of the Sustrans Portrait Benches series and the public chose the subjects to honour their contribution to the community. In the movie, Bond had made a brief cameo raising a glass to the duffel coat-clad bear and toasting his own creation. You can then proceed to Little Venice where you can find a lot of pubs, cafes and restaurants where you can rest and have a drink or a bite after enjoying a walk along the serene waterways of the neighbourhood. You can then enjoy a canal boat ride from Little Venice to Camden and proceed towards number 32, one of the pastel coloured houses on Chalcot Crescent in Primrose Hill where the Browns live.

The other alternative is to go to Oxford Street and visit Selfridges as this was the store where Michael Bond, a BBC cameraman at that time, purchased a small teddy bear for his wife on Christmas Eve in 1956. This small bear, named Paddington by Bond, was the inspiration behind the books series. You can visit the amazing toy department on the fourth floor of the store.

You can then proceed towards Regent Street and visit the world's most famous toy shop Hamleys where Paddington bears are being sold for 40 years. The five floors of the store are full of computer games, dolls, board games, specialist collector areas and much more that specially attract kids who can spend the whole day exploring the various play items. Moreover, you will find it interesting to see the latest toys being demonstrated by the staff.

The next stop on the itinerary is Leicester Square that you can easily walk up to. The star-studded world premiere of the Paddington movie had taken place here in the presence of actors such as Nicole Kidman and Hugh Bonneville. You can then proceed towards Bear Street which is just off the square.

In the afternoon you can visit South Kensington and Notting Hill or Bethnal Green.

Your next stop is the Natural History Museum which you can reach by taking a tube to South Kensington. This museum is the location where the dramatic climax of the movie was shot showing how the cruel taxidermist Nicole Kidman tried to add Paddington to her collection of endangered animals. Besides this attraction, kids will love seeing the dinosaurs at the museum which is home to the famous Diplodocus skeleton and a roaring T-Rex. The scene depicting the sewers under the museum was actually filmed in a reservoir underneath Finsbury Park and the scenario of the secret room was shot at Leavesden Film Studios, which is adjacent to Warner Bros, Studio Tours that reveals the magic of the Harry Potter movies.

You can then go to Notting Hill Gate by taking a Circle Line Tube and see the stomping ground of the Paddington Bear. You can see Alice's Antiques at 86 Portobello Road, which was used as the exterior for Gruber's Antiques shop in the movie.

Alternatively, you can go to Bethnal Green by taking the Central line Tube and visit the V&A Museum of Childhood where you will find a huge collection of teddy bears, including Paddington. At the museum, the Paddington toy that has been displayed is a British version shown to be wearing a safety pin in the hat which is different to the American version. You can then see other London landmarks that have featured in the movie, such as St Paul's Cathedral and Buckingham Palace.

In the evening, you can visit Fortnum & Mason, the fine food purveyors which remains open until 8pm Monday to Saturday and until 6pm on Sunday. Here you can buy a jar of marmalade which was the favourite food of Paddington. The flavours available in the huge collection of marmalade at the store include a wide range from lemon to grapefruit, cognac to whiskey.