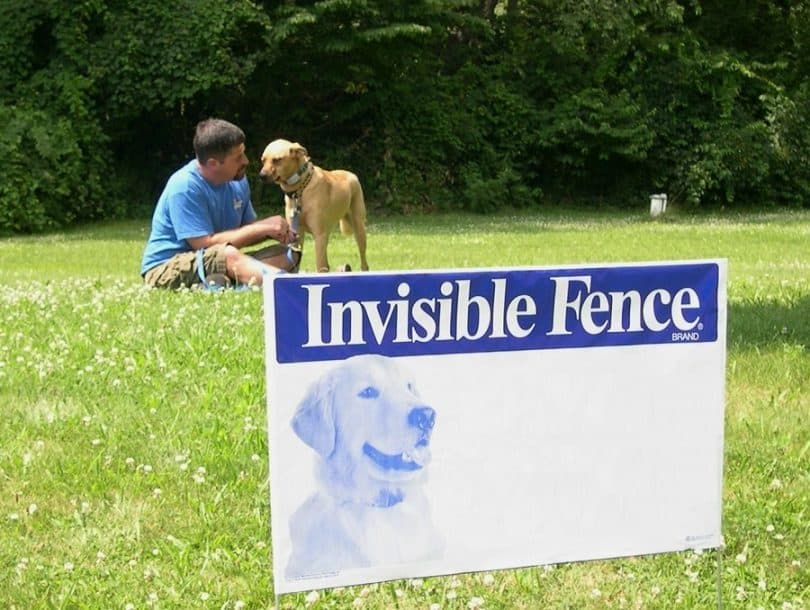 As dog owners, it is of utmost importance to keep dogs safe, healthy, and happy. When it comes to going beyond the borders of your home walls, allowing your pup to roam freely outside, is truly not a safe option.

One can look at the choices of taking the dog out on a leash, staking a chain out for the dog to be attached to or putting up a fence (be it a physical or an electronic, invisible fence). Having any type of fence in place allows some freedom for your furry friend, and you.

Compared to a yard without any fence, an invisible fence is going to create more safety for your dog. While there are pros and cons to an invisible fence, below are some factors to keep in mind when considering this type of fence for your pet:

Creating Freedom for Your Dog

Invisible fences are a much better alternative to keep dogs safe, versus free roaming. These fences can create a sense of open borders, with seemingly plenty of space to explore. Although, the dog is still confined to a boundary.

As seen in many situations, some dogs, depending on their personality, will do anything to find their way out of an enclosed area (traditional fences, runs, and so forth), including digging, jumping, or chewing through wires.

One owner of a traditional fence claimed that her mixed breed constantly tries to get into the neighbor’s yard and garden area, by attempting to jump over the fence. The dog has made it over the fence a few times. However, if the fence door is open for the dog to see out, he does not try to leave.

With an invisible fence, dogs may be less likely to try to get beyond the barrier, since it is not visual to them; hence creating that sense of freedom so many dogs crave.

Keeping Other Dangers Out

An electric fence is not going to be effective in keeping other animals, or even unwanted human visitors, out of the yard. People can pose a threat. You can find news stories about puppies that have been taken right out of their own front yard. A traditional fence would not necessarily be able to prevent this from happening, either.

There are also many predators that lurk in the shadows, waiting for their next meal. Depending on your location, anything from coyotes, mountain lions, or alligators may be on the prowl. Obviously, this would be a bigger threat to the smaller pups, than the larger ones. However, even smaller predators (i.e., poisonous snakes) could create serious problems for any size dog.

Regardless of having a traditional or invisible fence, there are still threats that can be present. Birds such as eagles or hawks can swoop in and snatch up beloved pets.

Nonetheless, it is important to still monitor your dog, when they are outdoors, whether in an enclosed or invisible fence.

The Possibility of “Breaking Out”

Let’s be practical here and understand that even our furry family members are still animals, with animal instincts. I have witnessed a German Shepherd and Labrador mix run right through an invisible fence, chasing a squirrel. The shock of the collar did not even seem to phase him. At all other times, he maintains the border of the electric fence and does not cross over.

There have been other instances in which dogs have been known to run through the invisible border due to fireworks, or similarly loud noises.

The actual collar has also been known to contribute to the dog breaking free. Once the battery on the collar starts to run low, it can become ineffective in providing a warning or correcting the dog. Therefore, creating an opportunity for the dog to get out of the boundary.

Malfunctioning of the Invisible Fence

Invisible fences can become useless in the event of a power outage, or if there is any damage from the storm to the transmitter or wiring.

Another cause of malfunctioning could be if any of the wiring is impacted by other lines in the areas such as gas or cable lines. Metal objects or appliances have also been known to cause interference with the electronic systems. One owner reported that her garage door opener was causing interference for the invisible fence.

A primary indication of malfunctioning is if the collar starts to beep inside the house. This can cause the dog to misunderstand what is going on, and relate certain places in the house as areas not to go. Several owners have been known to just remove the collars from their dog before they enter the house. This is one way to guarantee the dog will not be impacted by interruptions from appliances or other systems.

Controversy Related to the Shock Collar

There are several people and groups, such as PETA (People for the Ethical Treatment of Animals), who do not believe that invisible fences are humane for dogs. This belief is connected to how the system works, with the collar providing a “shock” or stimulation correction to the dog if the boundary is crossed.

Several invisible fencing systems provide an auditory warning to the dog (through the collar) if they approach too closely to the boundaries. This has been shown to be an effective deterrent to most dogs, keeping them from crossing the boundary, and receiving correction.

However, as an owner, you can test the collar by placing it in your hand, to experience the feeling of the correction that your dog receives. Most invisible fences provide varying levels of correction, depending on the size and type of dog you may have.

There have also been concerns regarding the collar causing irritation or a rash from prolonged use. This is something simple that can be avoided by removing the collar when not in use, being sure to check the size and fit, periodically; and taking the collar off completely during the night time.

Nothing is going to be full proof in keeping your dog safe, 100% of the time. What it boils down to is being a vigilant, responsible owner, in doing all that you can to keep your furry friend protected.