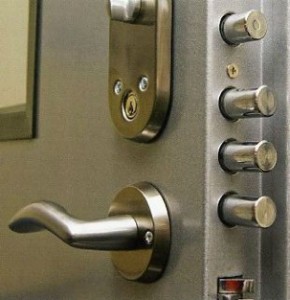 Having your home broken into can be an incredibly terrifying experience, and it happens a lot more than people often think. In the United States, there are 2,188,005 burglaries every year, according to the FBI. This comes out to about 6,000 burglaries a day. While this is sobering, the good news is that there are steps to fortify your house and to make it less attractive to would be burglars.

If you have a lot of expensive items in your home that are visible from the street, you are making yourself a bigger target. Often times people, and would be burglars, big screen TVs and high end stereo systems can easily be seen on the street from large street facing windows. One of the biggest steps to securing your possessions is to keep people from seeing what’s inside your house. This can easily be achieved by hanging heavy drapes over the windows to keep out the prying eyes.

Make Your House Look Occupied When You’re Away

Burglary rates are highest in August when people are on vacation and away from there homes. While many people leave a few lights on when they go on a trip, it is often easy to pick up on. A much better strategy is to put your TV and a few lamps on timers so that they turn on every night; the glow of the TV is particularly useful tactic as it is much more convincing than the static light put off by lamps.

If a burglar is looking at potential targets, they are looking for the easiest house to break into with the biggest payoff. Making your house less inviting can go a long way in keeping the burglars away. While windows are often an easy entry point, we can make them much less inviting by placing thorny and prickly plants, such as rose bushes or cactus below the windows.

Windows are one of the most common points of entry as they are often left unlocked or easy to smash. People often leave windows wide open, especially in summer months. While it may seem simple, it is important to make sure that all your windows are closed and locked when you leave your house, even if it’s only for a few minutes. Most burglaries take less than 12 minutes or less, so even if you’re just running to the store, it is important to make sure that your windows are closed and locked. For sliding windows, it is best if you can place a rod in the sliding track so that the window can’t open.

While there are nearly 6,000 burglaries a day, there is a lot that can be done to make your house a less appealing target. Whether you have a condo or a mansion, make sure to keep your valuables out of view from people passing by, plant thorny or prickly bushes under the windows, close and lock your windows whenever you leave, apply security film to your windows, and make your house look occupied by placing a few lights and electronics on timers when you go on vacation. If you can apply these simple steps, you will be a much less inviting burglary victim.