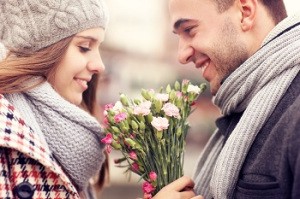 To bring, or not to bring: that is the question. A man holding a bunch of flowers on a first date is now viewed as a thing of the past by contemporary pick up coaches. Most women don't approve of this gesture either. "Most" doesn't mean all, that's why one cannot be too categorical, as there are different situations and different girls. However, life proves that you'd better not bring her flowers on your first date. Dating specialists from Bridesdating.com Agency explain why.

It's a man's personality that matters, not a bouquet

These days, women don't expect to get a gift or bunch of flowers on a first date. They are more interested in what kind of a man their date is. If you're confident, gregarious, persistent, courteous, and well-built, you don't need any additional auxiliary tools, that is, flowers, to impress her. You may be the best present she'll get in her life.

Flowers are not for wooing

It's generally accepted that men give flowers when they are already in a relationship with a woman. During your pre-relationship (or pre-sex) phase, a woman analyzes you. She tries to find out more about your character, your strong and weak points, etc. If you buy her flowers at this point, she may get the wrong idea about you and may start testing you. Things are different when you've already had sex or entered into a serious relationship. That means that the woman is certain about her feelings for you and your gesture won't do you any harm.

It has been out of fashion for 30 years. Some men say that the chivalry is not dead and giving flowers is a tried method of courting (tried by their fathers). Those men cannot realize that times have changed and what was then is different now. Men should move with the times in order to keep track of the current dating norms and to avoid awkward situations.

It's a means of begging

Women look for a self-confident man with a strong spirit. For them, men of that kind are always surrounded by the crowds of women and don't have to put much effort to draw ladies' attention. That's why when this powerful man shows his affection towards a woman by way of giving her flowers she'll be extremely pleased and she'll never think that he did it to get something in return. But when a "low-rank" man, that is a guy who is not very popular among women, brings a bunch of flowers, woman considers his gesture an attempt to bribe her. So, if you don't want to get onto woman's black list of the weak men, don't even think about bringing her flowers.

If you decide to bring, do not overdo it or do it spontaneously

If you feel an irresistible desire to bring some flowers for your date, no one can ban you from doing that. However, it's vitally important not to go overboard. Don't bring an enormous bunch of roses, a single flower will suffice. It's just the case when the principle "the simpler, the better" works to your advantage. So, you'll do nothing wrong if you show up with a sunflower, at least, you'll amuse her. You can also get her a flower unexpectedly, buying it at a flower stand in the middle of you date. This will be a good way to entertain her.