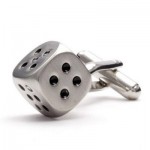 Before the advent of cuff links, stylish men had to hold their cuffs together with ribbons or ties. Ready for something more stately and decorative, men were thrilled when jewelry designers created cuff links. First comprised of small chains linked to gold or silver buttons, cuff links entered the fashion scene in the seventeenth century according to the Cufflinks Depot.

By the middle of the seventeenth century, cuff links were popular among the aristocracy, and even King Louis XIV was seen wearing them. Because cuff links were originally the domain of the rich and powerful, they were made with expensive materials including diamonds. According to Fire Mountain Gems, the London Gazette made a reference to a pair of diamond cufflinks in a 1684 edition of the paper, and by 1715, fancy men were regularly sporting decorative cuff links made with gorgeous and expensive jewels.

Fire Mountain Gems continues to explain in their history of cufflinks that shirts with French cuffs became popular in the 1840s. These button-free cuffs made it essential for any stylish man to have cufflinks, and luckily the production of cufflinks was increasing at the same time. As the eighteenth century rolled into the nineteenth century, the Industrial Revolution began, and its effects were so far reaching that it even affected the production of cuff links.

In 1880, George Krementz, an American inventor, created a machine that could mass produce cuff links as well as buttons. Thanks to his contribution, cuff links could now be made easily and in large quantities. Now, because manufacturers could make cufflinks so easily, they began to produce a greater variety of them. They also simplified their design. Instead of using chains, they started using rods and fasteners with clips,

The increase of cuff links in the marketplace created a fashion frenzy, and even shirt makers needed to amp up production. Because most casual shirts weren’t right for cuff links, shirt manufacturers needed to create more and more low cost dress shirts so that anyone could wear the newly fashionable cufflinks. As cufflinks became more culturally pervasive, businessmen decided to make them into daywear. They had been largely reserved for evening and formal use in the past, but fashion forward businessmen started wearing them during the day. As interest increased, production continued to increase, and prices went down which made these stylish accessories accessible to most men regardless of income or stature. As sales of dress shirts and cufflinks increased, the styles diversified and men were able to express their unique personalities through a wide range of stylish and fun options.

Near the end of the twentieth century, shirt makers started to create dress shirts and tuxedo shirts with buttons on their cuffs. This meant that men could wear these shirts without cufflinks, but undeterred, jewelry makers continued to produce cuff links. Large companies like Tiffany and Cartier were not willing to give up this trend, and it turned out that dudes weren’t ready to give it up either.

By the 1950s, cuff links were experiencing a resurgence, and they were a must have for businessmen and fashion lovers alike. Whether they were headed to a gala or the office, no man looked fully complete without this incredible accessory. From Peter Pan to James Bond, cufflinks were even featured on the big screen. Now, fifty years later, as cuff links try to make another resurgence, they are seen even on the small screen. Stars like Jon Hamm, whose character Don Draper is scarcely seen without cuff links, is one of the many Hollywood stars bringing cuff links back to the forefront of the fashion world.

Now, cufflinks can be made of almost anything. Men can choose between cheap and novel links celebrating their favorite cartoon character, opt for elaborate and expensive jeweled links, or go to a custom jeweler and go through every aspect of the design process for a completely unique cufflink. They can even incorporate fun historical artifacts on to their cuffs. For example, a steel penny created in 1943 during an anticipated copper shortage has been made into a charming pair of 1943 Lincoln cufflinks that are perfect for any history buff. Whether men want to celebrate their quirks, display history on their sleeve, or just look fashionable, cufflinks can help them accomplish that feat.