While it’s useful to know the stats – how many people in how many countries speak which languages ­– this doesn’t always translate into the answer to the question: which are the most influential languages in the world? The influence of a language is more complex than the raw data. Informed opinion from linguists and cognitive scientists suggests that influence is governed not so much by a language’s attributes as by how it connects to others. 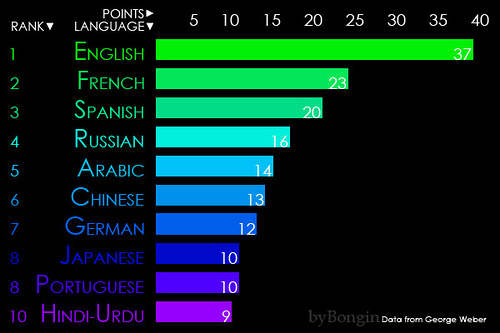 Which countries and cities do you think are multilingual in nature? This is not related to how many different languages are spoken in a given locality, for example London, but rather to how many members of the population have multiple languages, and use them. Here are a few examples.

In stark contrast to these examples, three quarters of citizens in the UK and the USA citizens are monolingual and unable to converse in a foreign language. It seems likely that this could become a notable disadvantage in the future as the rest of the world becomes connected at multiple levels. However, it’s never too late to learn.