A natural disaster can wreak a significant amount of damage to our homes, which can often require a considerable amount of time and investment to fix. Outside of the physical damage to our homes, however, there can be a variety of other things that need to be looked at after a flood or tornado. While the appliances and furniture are one such aspect, there’s also the documents you have in your home, which can often be vital. Despite this, many people may not realize how they can replace these documents should a natural disaster occur.

Because of how difficult these documents may have been to get in the first place, many people may believe that replacing them is just as complicated. For many, however, this shouldn’t have to be the case. This is primarily because much of the hard work would have been done when you initially applied and received, these documents. This means that the process behind getting them replaced can often be relatively simple and may only take up a small amount of time.

That doesn’t mean that the replacement procedure is the same for each of these documents. This is because you will need to contact various agencies and companies to do so. Despite this, the process for each document may only need a few short steps. 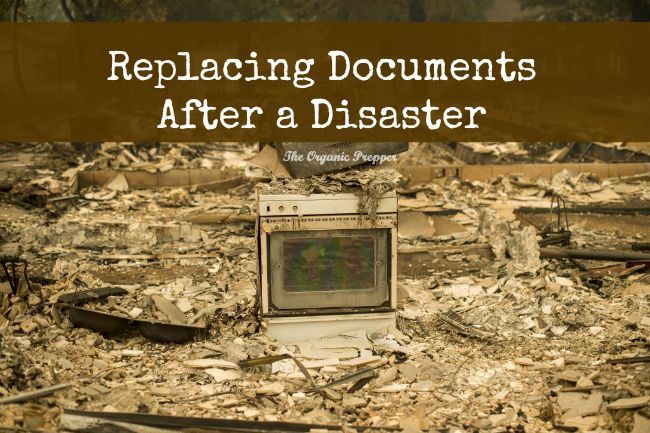 How To Replace Vital Documents After A Natural Disaster

A social security card can be vital for a variety of things, so it’s something that you’ll need to replace as soon as possible should it be damaged or lost. This importance is further compounded by the fact that it can often be needed to replace many of the other documents that may have been destroyed. Luckily, there’s quite an easy way to replace it, and normally only takes a few steps. One of the quickest ways to do so it to get online application for a social security card.

Getting a replacement passport can be a relatively straightforward process, with many states allowing people to do so online or through the post. This is something that can vary from state to state, so you should double-check with your local agencies. You’ll also need a few different documents when doing so, such as a birth certificate, among others. Because of that, your passport should be one of the last things you’ll be able to replace after a natural disaster. Once you have these supporting documents, however, the process of replacing your passport should be relatively simple, and your local passport acceptance facility will be able to walk you through it.

Birth, death, marriage, and divorce certificates may be some of the easiest documents to replace should the originals be destroyed in a natural disaster. There are a considerable amount of companies external to government agencies that will be able to replace these documents for you, with many of them being the firms that issued them in the first place. To do so, however, you should need proof of identity and a few other supporting documents. In many cases, though, it may be as simple as using your social security card and number to prove your identity. While simple, this may take some time to have them replaced.

While the likes of marriage certificates may be simple to replace, your financial records can often be much easier. In this case, you may often just need to contact the financial institution that you’re a customer of and they’ll be able to give you most of the documents that you may need. On top of this, the IRS may also be able to provide you with a certain amount of this information. In both of these cases, however, you’ll need to prove your identity before you’re able to get these documents.

How To Keep Important Documents Safe

Because of the time and effort that needs to be put into replacing vital documents, many people will want to avoid it as much as possible. This means that you could always take precautions when it comes to protecting them, which is especially true if you happen to live in an area that’s prone to various natural disasters. There can be a variety of different ways to do so, with one of the most common being to keep digital copies as much as you can. In some cases, however, this may not be possible. Luckily, there are a few other ways that you can keep them safe.

Banks and financial institutions can often be one of the safest places to keep anything. What many people may not realize is that they’re not just for your money, as the vast majority of them also offer safe deposit boxes to use. While these may not be able to store large belongings, they can often be an excellent choice when it comes to storing your important documents. The built-in security for these boxes doesn’t just focus on theft.

While a safe deposit box can be great for a variety of different things, they may not be an appropriate choice for documents that we may need to use regularly, such as a social security card. Because of this, you may want to choose something closer to hand. This is where a home safe can be effective. However, it’s worth noting that this may only be the case when it comes to a high-quality safe.

This is primarily because the majority of high-end safes can be air-tight, which means that they can offer a significant amount of protection against flooding. Many of these safes can also be installed in walls and a few feet above the ground, which adds even more protection against flooding. Add in the fire resistant materials that these safes are often made of, and you’ll be able to ensure that the majority of natural disasters shouldn’t have too much of an effect on your vital documents if any.

By concentrating on preventing any damage coming to your documents, you’ll be able to avoid spending a considerable amount of time needing to replace them. While purchasing a safe, or hiring a safety deposit box, may seem like a significant expense, it can often pay back dividends when it comes to peace of mind. Furthermore, when you’re replacing many of your documents, you may end up having to pay a fee to do so. As such, by protecting them as much as possible, you’re saving yourself a noticeable amount of money, not to mention the time and stress that replacing them often entails.