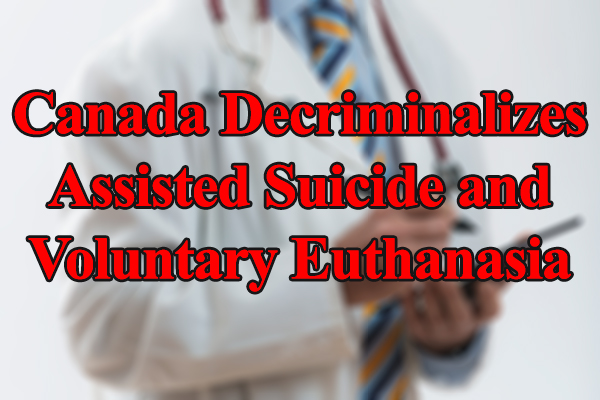 Until last year’s passing of the new law, assisted suicide was a criminal act and considered tantamount to murder. That left thousands of patients in the Toronto area needlessly suffering from terminal illnesses for which there were no cures or hopes of recovery. Most of them endured inhumane treatment, or sitting comatose for years on end. As a result, the measure was passed to provide mercy to those in excruciating pain or to save loved ones from the agony of watching their loved ones suffer.

Advance directives, which are not allowed for assisted suicide, would allow someone the right to write a statement about how they would like their assisted suicide to be performed should they become incapable of making the request themselves. Criminal attorneys in Toronto can attest that the original Bill C-14 makes it legal for anyone over the age of 18 to ask for assisted suicide in situations where they have an incurable disability or disease for which a foreseeable death is the only resolution. Instead of having to endure the pain and suffering of a long death, it allows patients a way to die with dignity and on their own terms.

At the time of the bill’s passing, there were many who believed that advance directives should be included, but the Liberal government decided to put it on hold and consider it more thoughtfully before including it in the legislation. A panel was formed to review the issue, but to date no decision has been made; this has put thousands of people in a position where they feel pressured to make a quick decision before they have to put the onus on family members to make the right choice for them, if they can no longer decide for themselves.

Perhaps the biggest advocate for advance directives is an aging population succumbing to dementia. Fearing that the time is ticking, they are being forced to make a decision before they are ready or may face the potential that someone else might not know when or be able to let them go when they want to die in peace.

There are proponents to advance directives who insist that it is one thing to allow someone to decide on assisted suicide when they are coherent and have the capacity to make a life-ending choice. But it is whole other idea to allow someone to make a choice ahead of time in writing. Things might change and circumstances might be different. If the plan is in writing and it is legally acceptable to follow through with the instructions, that could completely alter the picture of assisted suicide legalities.

Sometimes the anticipation of suffering isn’t the reality for people with dementia. If you allow patients to make decisions based on anticipating the worst, then they might be coming to the wrong conclusion for their future. For now, the panel will continue to debate the legality of advance directives for assisted suicide, and whether allowing someone to help another person with a prior written statement to commit suicide is a criminal act or one of mercy. But what is for sure is that it might extend the lives of those who make the decision too early out of fear that they might lose their chance, leaving them unable to make it at all when the right time does come along.