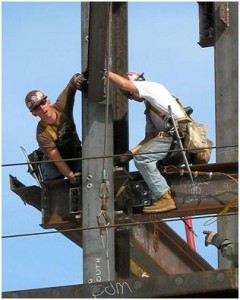 It's a tragedy when someone dies on the job.

A horrible reality is that some jobs in this country are downright dangerous and people do get hurt from it. Recently there was a man in Pennsylvania who was killed on a construction site. He went to work early in the morning and while working by himself he somehow ended up pinned under a backhoe.

According to the Occupational Safety and Health Administration (OSHA) 4,383 on the job fatalities occurred in 2012. This comes out to be on average 84 deaths per week, and about 12 per day. Put another way this is about 3.2 deaths per every 100,000 workers. Of this about 775 were in the construction industry.

Although this number is the second lowest preliminary total since the record keeping began in 1992, the number is still large. Not to mention if it is you or your loved one that is affected it would still be awful no matter what the statistics say.

Construction is a profession of hazards it's true. But with strong safety regulations that are strictly adhered to any construction site can be improved. OSHA lists the "fatal four" causes of death on construction sites and points out that eliminating these would save the lives of over 400 persons each year.

So who is responsible for your safety at work? OSHA holds employers accountable to the extent that they can but with numerous job sites accountability means site visits. It may take considerable time for OSHA to get to your site. Further your site may be so big that OSHA never sees all of the problems that are there.

Employers still remain responsible in the event of injury and death as far as who pays the bill, but you as the employee also need to remember a key fact.

That fact is you have a voice and you have rights. This is America. You have the right to expect your employer to adhere to safety standards. You can speak out and talk to your employer about unsafe practices you've observed. This can be tricky however, when you are trying to impress your boss and keep your job.

Instead you can proactively be involved in your sites safety committee, and most sites have them now as a standard. (If you are on a site that does not perhaps it's time to consider a career move to a better work environmentâ€¦â€¦.just sayin.) This gives an opportunity for many who are down in the trenches to have greater control over just how well a construction site is maintained.

OSHA also sponsors advisory committees that have members from both the ranks of employers and of workers because as they put it, "Congress recognized the value in seeking advice and guidance from the public through the enactment of the Federal Advisory Committee Act of 1972." Their meetings are open to the public, and public comments are accepted. If you have information that will help to improve safety standards there is a forum of people that are open to listening to you. Don't stay silent.

It is important that you also do your leg work. In the information age a simple Google search will yield all kinds of information on what the safety standards of our country are. Be an informed worker and know what to do to keep your job safe as well. The more you know the more the better you can protect yourself.

No matter what course of action you decide to take in working toward your own workplace safety, you are contributing something positive to the collective whole. Accidents can be prevented with higher standards, more attention to detail, and the contributions of people who do the work just like you.

Donald Jaburek of Pope &Jaburek, P.C. in Chicago, Illinois is a personal injury attorney with decades of experience. Mr. Jaburek focuses his practice on motor vehicle accidents, workplace injuries, slip and fall, medical malpractice, wrongful death, and most other types of injury cases.