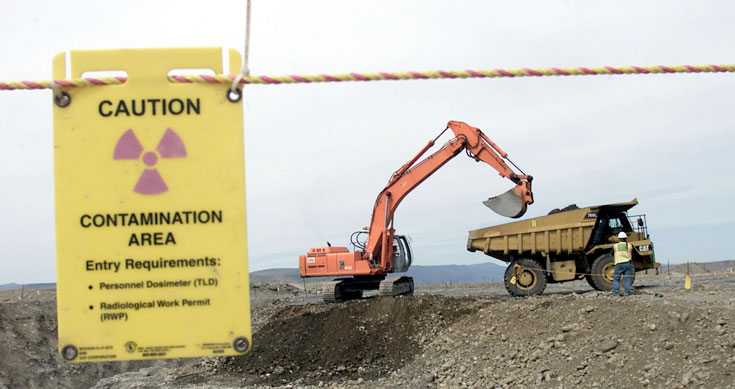 Environmental Remediation refers to the process of reducing the radiation exposure of people or the environment from nearby contaminated sites (soil, surface or ground water) in some way or the other. It essentially aims to protect the environment or the people from the harmful effects of such radiation.

When nuclear development started, the environmental impacts of such activities weren’t properly assessed. Neither were there strict guidelines or rules to regulate them effectively, as a result of which radiologically contaminated sites sprung up in various corners of the world. Nuclear disasters also led to the creation of such sites.

Exposure to these radiations could lead to undesirable health conditions of the local people or adverse effects on the environment. Hence, the need of remediation. Now this can be applied in two ways:

– Treatment of the contaminated media, its isolation or removal.

– Attempt to break the pathway of radiation so as to disable it to reach the environment or people. It could lead to changes in land use or even evacuation of the area.

Nevertheless, any way of remediation isn’t a quick fix. It also has to be justified. Even certain living organisms are a source of radiation. A comprehensive scientific evaluation of the area is an essential need so as to avoid unnecessary trouble to the local people. The following social or technical aspects are considered before deciding on the way of remediation:

– Financial costs of remediation are normally very high and hence, needs to be arranged.

– If the site is contaminated by any other non-nuclear wastes like heavy metals or harmful hydrocarbons.

– Remediation itself generates a lot of wastes. Waste management techniques are to be decided upon.

– How much would it affect the people and their living habits?

– The ultimate benefit. Is it worth it?

However, a proper regulation framework with regards to environmental remediation activities is still missing. It is unclear as to who is responsible for these activities or who would fund these processes.

The remediation techniques are broadly classified into two categories – in-situ(interior) and ex-situ(exterior) methods. In the former case, the contaminated soil or water is treated in its original position, no moving it. The latter method involves the extraction of the contaminated media to the surface, followed by its treatment.

A few common water and soil remediation methods include:

1. Thermal Desorption – A method of soil remediation wherein a desorber gasifies the dissolved contaminants. The waste gas is collected and later treated.

2. Pump and treat – This method basically pumps out contaminated groundwater using a submersible pump and its consequent treatment.

4. Nanoremediation – In this method, highly reactive nanoparticles are introduced into the soil or water. These agents end up degrading the contaminants through various reactions.

5. Bioremediation – Certain bacteria are deliberately injected into groundwater to eat up the contaminants.

6. Solidification and Stabilization – A very common technique of treating soil, some agents are added to the soil to form stabler compounds, so as to make them immobile.

7. Air sparging – Large volumes of air is injected into the soil to force out the contaminants. It depends on a number of factors like the depth of the source, the level of concentration of the contaminant, pH level of the soil, etc.

– The sites of Chernobyl and Fukushima disasters

– Another nuclear accident in Goiania in Brazil

– A polluted site in Bakar in Croatia