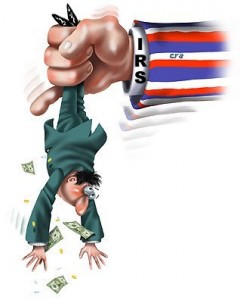 Those dreaded auditors at the IRS have you in their sights. Unlikely? In reality…yes. It is unlikely.

But just because you're paranoid doesn't mean that they're not out to get you. Although barely one percent of Americans get audited each year, there are certain red flags that the IRS agents watch for. Fly even one of these and your chances of getting audited increase by as much as five times.

Let's look at the hard, cold reality of things you may do that put you in the IRS crosshairs.

Make a lot of money. Oh, yes. The old saying is "The more you make, the more they take." The IRS doesn't exactly "despise" wealthy Americans, but it does enjoy seeing them as cash cows. What's "a lot" of money in the eyes of an IRS agent? It's a lot less than you may believe: a six-figure income (even if it's "only" $100,000 per year) gets you on the "watch that guy" list.

Suddenly increase your income by a substantial amount. You work at a $40,000 per year job that you don't particularly like. But when you're home at nights and on weekends, you spend your time learning how to become an Internet affiliate marketer. After a couple of years, your research and diligence pay off in a big way: you go from $40,000 a year to $500,000 a year in a matter of months and you quit that aggravating day job. Doing the happy dance are you? The IRS is doing the "red flag" dance once it gets your tax return forms.

Conspicuously low income. What gives? Specifically, if you're reporting an annual income that is far below the average for your profession or industry, the IRS agents don't think "this gal is incompetent". Instead, they think "what money is this gal hiding from us?"

Being self-employed. When you're self-employed you have to fill out a Schedule C for the IRS. That's alright, except you had better start showing profitability within three years. If you keep on showing net losses after that, the boys at the IRS start wondering how much money you're making — and not reporting — at your "other job"; you know, the one that actually pays your bills and allows you to eat.

Having an in-home office. Having one of these is probably the easiest way to get red-flagged by the IRS. A lot of people do the happy dance when they get a home office because not only can they kiss the commute goodbye, they also think about those juicy tax deductions that they're legally allowed to take. Unfortunately, you have to be virtually perfect at itemizing these deductions or you can expect an auditor's knock.

Too much deduction for "entertainment". If you're self-employed, you're legally allowed to write off entertainment (which includes taking people out to eat and picking up the whole tab) — presumably of clients and prospects– as a business expense. But if the watchers at the IRS start getting the impression that you're entertaining invisible clients, writing off pets' food expenses, deducting what it costs to take your girlfriend to see a hockey game…well, you're getting the red flag

How Can You Prevent the Red Flags from Flying? Any CPA worth his salt will tell you that you should take every legal deduction that you can find out about. However, at the very time you need to simply be totally honest and transparent about your real income and real expenses. Keep all receipts in one organized space if you're self-employed or running your own business venture on the side.

If you're honest and transparent and you document everything, you should be able to avoid the auditors' mighty pens.